With the help of our planning partners at the Atlanta Regional Commission as well as the diligent work of a steering committee made up of a diverse group of talented and passionate individuals from the community, our recently adopted comprehensive plan has been accepted by the Georgia Department of Community Affairs (DCA). We have been notified that our Qualified Local Government (QLG) status has been renewed, signifying that the city is in compliance with the state’s local planning standards. This regulatory process is important because our QLG status is tied to our eligibility for funding and other benefits associated with various state-administered programs.

Permits. Thirteen single-family home permits were issued in the month of February with an average of 2,824 square feet per home. Permits were issued to begin restoration of several units damaged by a fire last year in Castlegate Townhomes on Level Creek Road. Plan reviews were initiated for several development projects including a proposed apartment project by 360 Residential, a new facility for the American Legion Post 127 on Suwanee Dam Road, the city’s Goldmine Park on Level Creek Road, and the relocation of the Veterans Memorial on West Broad Street. Buildout continues in the E Center with permits being issued for Perazim Boutique and Indio Brewing while certificates of occupancy were issued for Northpointe Hospitality and Crazy Dough’s Pizza. A commercial remodel permit was issued for Mika French Sushi which will be located in the same shopping center as Choice One Urgent Care, Daddy O’Brien’s Irish Ice Cream Pub and Native Cotton Boutique on Suwanee Dam Road. 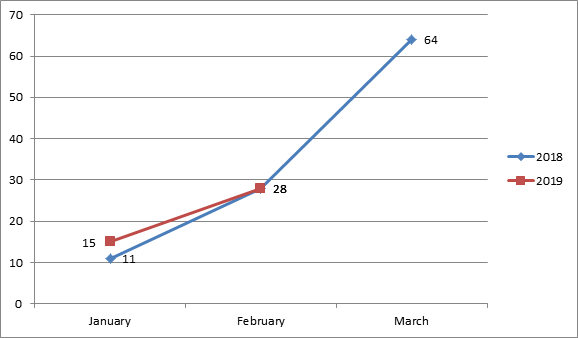 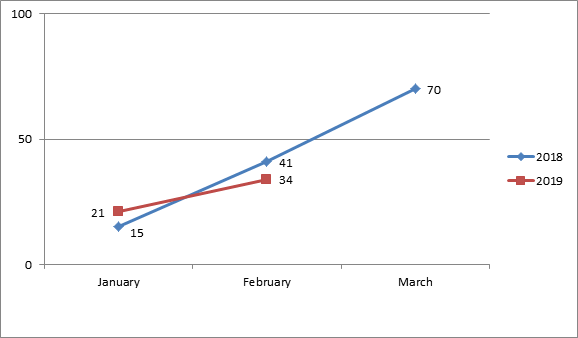 Inspections. In the month of February, 228 building inspections were accomplished; a decrease from the 325 performed the previous February. There has also been a decrease in the overall count of re-inspections, suggesting that work is progressing more efficiently.

A total of 309 zoning and property maintenance code inspections were carried out this February, slightly less than the 319 performed February of last year. This year has seen an overall increase in code inspections with about 21 percent more being performed year-to-date.

Parks. Weekly maintenance occurred throughout the park. Restrooms were painted, and trees were trimmed around light poles to allow more lighting on the paths. The Corps of Engineers permit was issued to begin expansion of the grass fields. Repairs were completed on the deer fencing and pathways were cleared around the community garden.

Downtown and City Hall. Regular maintenance was performed throughout the downtown area to include City Hall and the Community Plaza.

The Bowl/The Ice Rink. The ice rink concluded its fifth (5th) successful season in February and has been disassembled. The Bowl venue is now being prepared for the upcoming concert season.

E Center. There have been 3,640 memberships issued for the gym. Several large events have been held at the center and have been a success including the Bassmaster Elite Series registration and the Lanier Education Foundation Hook’em and Hold’em event.

Golf. The course was included among the best golf clubs in the county in the latest Best of Gwinnett awards. Attendance was slow in February due to the wet conditions. Final paperwork was processed for the purchase of a new golf cart fleet. The Sugar Hill Golf Association held their first tournament of 2019 with 22 players in attendance. The next tournament is scheduled for Saturday, March 16th.

The Eagle Theatre. In February, the theatre brought in over 900 people with movies and rentals. The Susan Chambers Dance Company and the Sugarloaf Ballet both put on spring shows for their first time in the theatre and have now both booked dates for future shows in the space. The movie series was a great success and will continue throughout the year. The most popular movie last month was The Breakfast Club.

The March Movie Series features films from the ’90s with Forrest Gump shown on March 5th, Hook on March 12th, Space Jam on March 19th and The Matrix on March 26th. All movies will show at 12:00 PM and 7:00 PM. Event updates and information is posted on social media as well as the city and theatre websites.

The Players Guild began their show Goodbye Charlie on Friday, March 8th. The show will continue until March 23rd. Tickets are available at www.eagleatsugarhill.com.

The Bowl. The first concert of 2019 (Trace Adkins and Clint Black with special guest John Berry on May 4th) was announced last week and tickets went on sale through the artist’s presale on Tuesday, March 5th. Demand was extraordinarily high with over 483 tickets sold on the first day and 848 seats in total for the presale. All remaining tickets (200 tickets and 9 tables) were sold within the first 15 minutes of the public sale on Friday, March 8th.

The second concert in the series, announced earlier today, will be held on June 1st and will feature 2015 Rock & Roll Hall of Fame Inductees Joan Jett and The Blackhearts. There will be a presale for residents on March 15th at 10:00 AM and they will go on sale for the general public that same day at noon. To stay up-to-date on the concert series, visit www.thebowlatsugarhill.com and follow The Bowl at Sugar Hill on Facebook. All suites and season tables have been purchased for the 2019 concert series.

The three remaining concerts will be announced over the coming weeks rounding out what we think will be the best concert line-up yet for The Bowl.

A 2019 calendar of events will be out to share soon. It will include free community events such as Splash Nights, Sugar Rush and the Holiday Celebration as well as ticketed events in The Bowl and The Eagle. The City of Sugar Hill’s Wellness Committee will host a free health fair on April 25th from 2:00-5:00 PM in the E Center. The fair will bring together local health service providers to share information, answer questions and provide free health screenings.

E Center. Crazy Dough’s Artisian Slice Bar fully opened for business on February 25th after a strong soft opening the week before. This is the second restaurant to open in the E Center.

Community Connections. Sugar Hill Community Night with the Gwinnett Stripers will be held on Friday, April 5th. Friends, neighbors, and families are invited to be part of this fun opportunity. The Stripers are scheduled to play the Norfolk Tides at 7:05 PM with fireworks immediately following the game. More than 100 community members and business owners joined the Sugar Hill Business Alliance for a co-hosted transit open house at City Hall on February 12th. Gwinnett County Chairman Charlotte Nash welcomed attendees and county staff was available to discuss Connect Gwinnett, the comprehensive transit plan for the county, and answer questions about the upcoming referendum on March 19th.

Suite Spot. Membership is in high demand with continued requests for tours and a growing waiting list for dedicated desk space and office suites. The Suite Spot was included among one of the best places to work in the Best of Gwinnett contest.

Gas Department. The Gas Department staff welcomed 11 new customers into Sugar Hill this month, bringing the total number of customer accounts to just under 11,500. Our team also completed utility-locate services on 401 sites for the month and worked with our construction contractors in various sites around the city to protect our underground utilities. The staff has been working through regulatory compliance tasks, new service installations, and 139 other service requests to round out the workload last month.

Street & Stormwater Department. Street Department staff wrapped up demolition of both 1174 and 1184 Hillcrest Drive properties and was busy making preparations for the JW Trucks building at 5000 Nelson Brogdon Boulevard. This work is making way for future downtown redevelopment and investment. Mowing operations is getting started early this year with the warm, if not wet conclusion to the winter season. Stormwater and development inspections, yard debris collection, storm debris removal, leaf clearing, storm drain clearing, regular equipment maintenance and repair continues to keep the department staff busy.

E Center. Rushing Trading Company, Crazy Dough’s Artisian Slice Bar, Northpointe Hospitality, Cloud Performer Consulting, and Blue Landworks are among the first tenants to have opened their doors in Sugar Hill’s downtown project. They are followed by Indio Brewing, Central City Tavern, Sweet City Smiles Dental practice, and Perazim (women’s clothing) as their buildout programs hope to wrap up soon. The contractor is still busy lining up longer lead-time items as they finish up punch list work in the project.

Sidewalks Projects – Whitehead and Suwanee Dam Roads. This SPLOST-funded sidewalk project is well underway on Suwanee Dam as the contractor approaches the 25% completion point. Due to the number of projects in and along the road including this one, traffic impacts are severe as lane closures are necessary for safe construction of the sidewalks. The phasing plan for the project will allow the contractor to start at the south end of Suwanee Dam Road, working north then back. Whitehead Road will follow in similar fashion working north as well. This work is jointly-funded with the county and will link key destinations in and around the city.

LMIG Annual Resurfacing Program. The project to complete road repairs and repaving through this program is slated to get started in March and has a contract completion date of June. The notice to proceed has been issued and a portion of the repairs has already begun. The balance of the project will await materials, equipment and weather to align in order to start, expected later in March. The project includes repairs and resurfacing to nearly 6 miles of city streets. The roads included in this contract are:

Sugar Hill Greenway. Right-of-way and easement acquisition are still in progress, but we are nearing completion on a handful of properties, paving the way to get the project out for bid.

Permit status is still pending with GDOT, but we expect to have the project advertised for construction as soon as we can get the permit released from GDOT and from Georgia EPD.

Veterans Memorial Relocation. The construction contract is being drafted and the project award is under consideration currently. The project is expected to get underway in early 2019, and a portion will be open and available for Memorial Day activities.

Oaks at Lanier Storm Water System Modifications. The project to construct stormwater improvements in the Oaks at Lanier neighborhood is nearing completion. Rain and other adverse weather conditions have slowed progress on the project during the last several months.

Stormwater Pipe Repairs. Repairs to pipe culverts under Secret Cove Drive, Arbor View Lane and Deep Creek Drive have been completed. The last segment of pipe is scheduled to be completed under Eagle Close Lane in the Links neighborhood in March. Several of the segments used the cured-in-place liner solution which allowed the roads to be repaired without impacting traffic or access to these neighborhoods.

2019 Bowl Improvements. A design kick-off meeting for a series of improvements to The Bowl was held over the course of the last two months to refine the scope of improvements to the venue. The scope includes customer-focused improvements, such as lighting, sound, and visual enhancements. The work will be designed and a number of elements completed during this concert season with the more significant improvements coming at the end of this season and into early 2020.

Gold Mine Park. The city’s newest park is going through a minor redesign to incorporate a few changes and will be timed to coordinate with the Greenway construction (the greenway runs through this new park on Level Creek Road). The project involves an enhanced trailhead and features access to the old gold mine entrance. Plans are currently in review prior to permitting and the bid phase for the project.

Downtown Gateway Signage. The next location for the iconic gateway monument sign developed recently is proposed for the west end of downtown, signaling its western entrance at West Broad and Highway 20. Plans for the sign will very closely match the one at the east end (Alton Tucker at PIB), but include a few modifications to fit the slightly different site conditions.