PLANNING AND DEVELOPMENT
Six single-family home permits were issued in the month of April with an average square footage of 2,536 square feet.

The development and building permits were issued for a new Culver’s restaurant to be located next to the Goddard School on Peachtree Industrial Boulevard at West Price Road. A rezoning application was also received for a proposed distribution warehouse project on Peachtree Industrial Boulevard between Commerce Parkway and Pinecrest Drive. Certificates of Occupancy have been issued for the addition at Sugar Hill Animal Hospital and Perazim Boutique in the E Center. 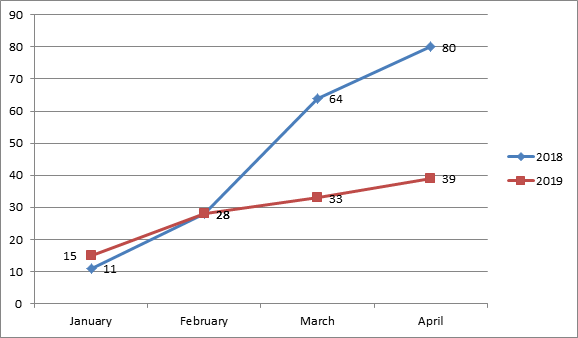 A total of 445 zoning and property maintenance code inspections were carried out this April, an increase from the 390 performed April of last year.

Parks. Weekly maintenance occurred throughout the City’s parks. Five trees were planted around the garden in celebration of Arbor Day. The Community Garden board members met with all gardeners to discuss the 2019 goals and objectives. The plots are now available and prepared for planting.

Downtown and City Hall. Regular maintenance was performed throughout the downtown area to include City Hall, the Suite Spot, the Bowl, and the Community Plaza. Maintenance to the splash pad began in preparation of the season opening. The amenity pond was cleared and cleaned of aquatic vegetation.

The Bowl. Continued cleaning and maintenance activities were completed in preparation for the concert season.

E Center. Current memberships at the gym have reached over 5,100 as the space continues to gain popularity. Several new classes will be added including Music and Kids, Tabata and additional fitness classes. Several private events occurred in the banquet rooms. Repairs and punch list items continue to be addressed throughout the facility.

Golf. The month of April saw an increase in players as we experienced less rain and warmer temperatures than previous months. The new golf cart fleet was delivered. Fresh mulch was spread throughout the landscaped areas of the course. All mowing reels were sharpened or replaced in preparation of the season, and the first verti-cut occurred on the greens to open the top grass layers and allow the air flow to the root systems. The storm drainage project began on the pond near hole three while several irrigation pipes were repaired throughout the course. The Sugar Hill Golf Association Triple-6 Tournament was held recently and a number of other events are scheduled for May.

The Eagle Theatre. The April movie series and Spring Break Bash brought in over 1,000 guests. Revenues remain strong for the month with both the movies and private rentals supporting concessions. The Broad Street Band held their first performance on stage this past month as well. The theatre will host several private rentals featuring dance and music performances this month.

The Bowl. The first concert of 2019 was postponed due to inclement weather and will now be held on the 19th of September. The next concert in the series is scheduled for June 1st and will feature Joan Jett and the Blackhearts followed by Blood, Sweat, and Tears on the 3rd of August. The Joan Jett concert is sold out; however, there are still a few remaining tickets for Blood, Sweat, and Tears. Visit thebowlatsugarhill.com to purchase tickets.

Other Events. Sugar Hill celebrated Arbor Day on April 26th with a proclamation read by Mayor Pro Tem Susie Walker at the base of our champion Southern Red Oak, estimated to be around 190 years old. The ceremony was attended by close to fifty students from one of our local day care centers. In addition to this ceremony, five new trees were planted in the Community Garden in celebration of the day.

E Center. The official ribbon-cutting ceremony for the E Center was held on the 23rd of April. Senator Renee Unterman and incoming Gwinnett Chamber President Nick Masino were in attendance along with other community members and city staff. The Sugar Hill Youth Council hosted the Opioid Crisis Symposium at the center on April 25th featuring panel speakers including Senator Renee Unterman as well as representatives from the Gwinnett Superior Court Judge’s office, Gwinnett Police and Navigate Recovery. The Gwinnett Business After Hours was also hosted at the facility on April 18th with strong attendance.

Perazim Clothing and Lifestyle Boutique held a soft opening on May 4th and their grand opening on the 11th of May. The mother-daughter-owned boutique features clothing and gifts and is the first retail space to open in the E Center.

Community Connections. The quarterly Community Round Table was held on April 29th and brought together leaders of Sugar Hill’s diverse community groups to identify opportunities for collaboration and partnership.

Suite Spot. Management of the Suite Spot, Sugar Hill’s business incubator, has transitioned to city staff after the planned expiration of the previous management contract with an outside company. This change will allow Economic Development staff to work more closely with entrepreneurs in the Suite Spot and execute plans for expanded programming and support.

Gas Department. The Gas Department staff completed utility-locate services on 619 sites for the month and worked with our construction contractors in various sites around the city to protect our underground utilities. We have installed over 2,900 new transmitters for the automated meter reading system, adding 76 to our routes during the month. The staff has been working through regulatory compliance tasks, new service installations, and 72 other service requests to round out the workload last month.

Street & Stormwater Department. Street Department staff has been assisting with downtown redevelopment and site preparation with two properties behind city hall. They were instrumental in assisting with the sale and disassembly of the old Atlas building as well as the demolition of the old JW Trucks building at 5000 Nelson Brogdon Boulevard as well as most of the structures on the east side of Hillcrest Drive. Mowing operations are also in high gear now along the road right-of-ways in Sugar Hill. Our stormwater staff is gearing up for our annual report due in June, having closed out the reporting period through the end of April. Stormwater and development inspections, yard debris collection, storm debris removal, leaf clearing, storm drain clearing, regular equipment maintenance, and repair continues to keep the department staff busy.

E Center. Central City Tavern and Indio Brewing are in their final days of their respective buildout programs. During the month of April, Perazim completed improvements to their space and opened their doors for a sneak peek the first weekend in May. Sweet City Smiles is also progressing through their buildout program as well, while a little further behind. Our newest tenant in the E Center, Southern Grace, a floral studio and gift shop, is just now getting started planning out the renovation of their space next to Perazim.

Sidewalks Projects – Whitehead and Suwanee Dam Roads. This SPLOST-funded sidewalk project is well underway on Suwanee Dam as the contractor is nearing the 50% point on this portion of the overall project. Work on the west side of Suwanee Dam Road is nearing the south end of this portion of the project limits as they work on the final few challenging segments before moving to the next section. The contractor expects that before the end of the month, they will be able to move to the south end of Whitehead before mobilizing to the north end of Suwanee Dam Road. The project work is jointly-funded with the county and will link key destinations in and around the city.

LMIG Annual Resurfacing Program. The project to complete road repairs and repaving through this grant and SPLOST-funded program kicked off in March and is aiming to wrap up later next month. Work has been completed on over half of the roads on the list, and the remaining should be completed within the next four weeks, weather permitting. The project includes repairs and resurfacing to nearly 6 miles of city streets. The roads included in this contract are:

Sugar Hill Greenway. We have approval from the Georgia Environmental Protection Division for the NPDES permit portion of the project and still await Georgia DOT, Gwinnett BOE, and Gwinnett Parks and Recreation permits and authorization to get the project to the bid phase. The remaining clearance items are, unfortunately in the hands of other agencies, like Gwinnett Board of Education (Easement), Gwinnett County Parks & Recreation (IGA), and Georgia DOT (Permit). Gwinnett Department of Water Resources has already met with city staff to coordinate a couple of conflict segments that we are working around. These segments will require rerouting and adjustments which we will work into the project as field-changes or permit modifications. Staff closed on two additional parcels recently and still lacks two key segments on the north end of the Level Creek Road alignment. Additional alignment and scope modifications may be required to keep the project moving on the north end (downtown) of the project.

Veterans Memorial Relocation. The construction contract is signed and executed, with a Notice to Proceed issued for the 15th of May. The project is expected to be completed in September 2019, and plans for Memorial Day activities are being adjusted to coordinate work on the site and to allow for groundbreaking activities on or very near the holiday.

2019 Bowl Improvements. The latest round of improvements to the Bowl is at the 50% construction document design phase, and many smaller project elements have been completed in-house. The bid scope includes customer-focused improvements, such as lighting, sound, and visual enhancements centered on concessions space, seating, and finishes. The work will be completed during this concert season with the more significant improvements coming at the end of this season and into early 2020 as a separate phase of construction.

22 Acre Park Concept Design. After a pond and dam condition analysis, staff met with our design team to outline a strategy to get the concept plan underway while engaging the stakeholder group from our design charrette a few years ago. A public meeting for the project will be held on May 20th at 5:00 PM at city hall to allow for updates to the conceptual scope, schedule, and budget as well as to gather input on project elements. The project will have to be phased in order to stay within our budgeted resources.

E Center Monument Sign. Street Department staff has been working the last month to complete on-site improvements necessary to place the sign at the southwest corner of the old JW Trucks driveway. The sign cabinet is currently in the final stages of production, and the LED display panels are on-site at the sign vendor’s shop awaiting installation.

Whitehead Road Bridge. This County project, outside of city limits and exclusively funded by Gwinnett is moving forward during grading and drainage installation. The contractor will be raising both approaches to the lengthened bridge span to clear the floodway elevation and future trail connection along the stream.