The city received grant funding from the Atlanta Regional Commission through the Livable Center’s Initiative to develop concept plans and conduct a feasibility analysis for a future phase of the Sugar Hill Greenway. The main elements of the plan include pedestrian and cycling safety improvements along Highway 20 as well as infrastructure improvements to facilitate safe convenient crossing of the highway and Peachtree Industrial Boulevard. The first public information open house was conducted via the city’s WebEx virtual meeting platform on the 15th of July. The next scheduled public meeting was initially planned for a mid-August date, but has been rescheduled to the 9th of September. Please refer to the city’s website and social media platforms for more information on the project: https://cityofsugarhill.com/sugarhilltrail/

Four single-family home permits were issued in the month of July with a square footage of 2,350. 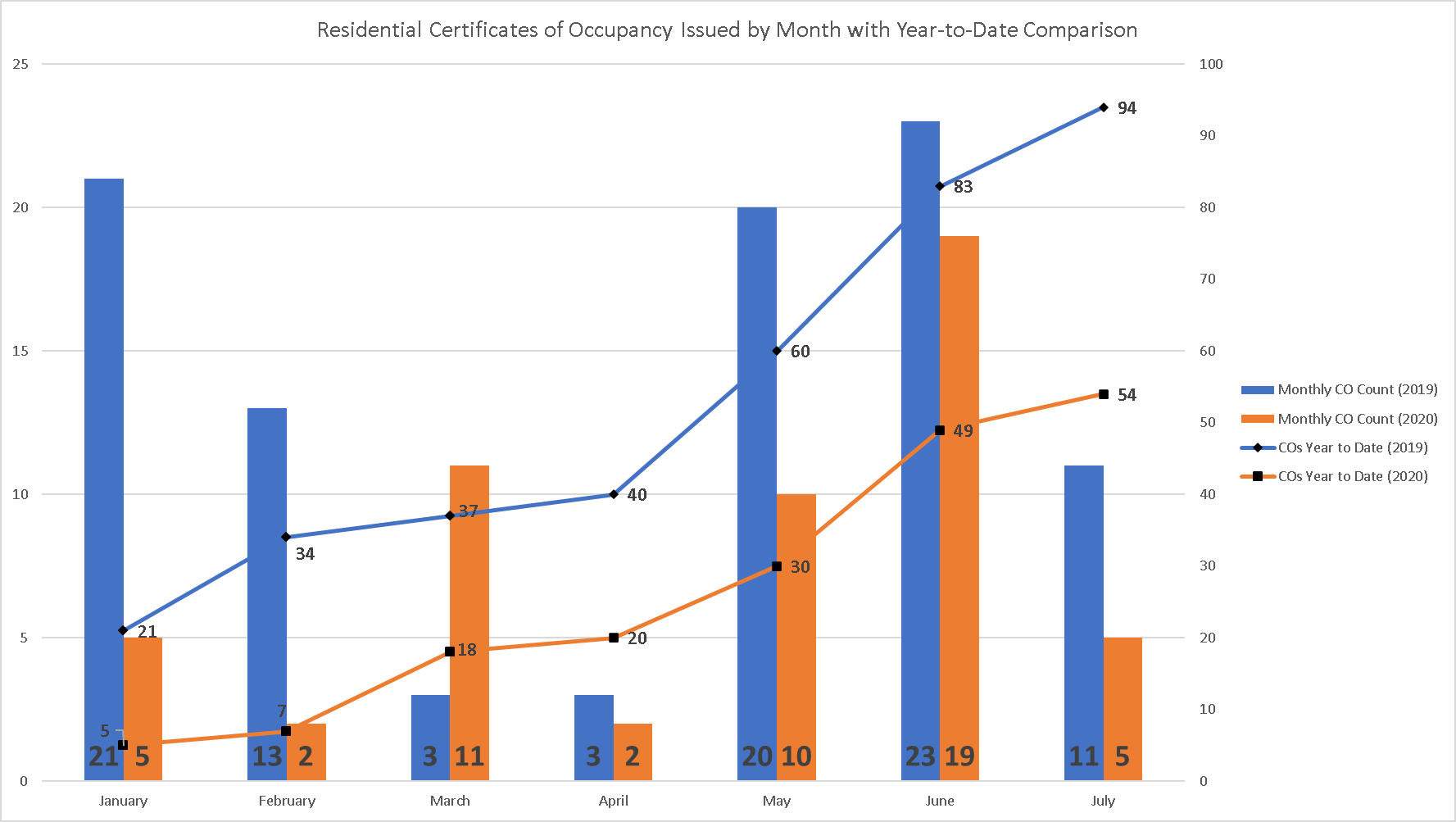 A total of 469 zoning and property maintenance code inspections were carried out this July, an increase from the 307 performed in July of 2019. Year-to-date, 600 more code compliance inspections have been performed for a total of 3,175.

Downtown and City Hall. Weekly maintenance occurred throughout the downtown area. The Splash Park re-opened after some repairs and has seen a steady flow of visitors. Restrooms continue to be thoroughly cleaned and sanitized. Trees and shrubs were trimmed, and weeds were treated around city hall and along West Broad Street. The Bowl area and several other locations around city hall were treated for bees. The duck house was placed in the pond in preparation of the arrival of our new downtown residents coming soon.

E Center. The gymnasium continues to operate following all public health regulations. There are currently 10,907 members. Regular cleaning continues daily throughout the facility. A few health and fitness classes have resumed with additional classes expected to return in September. The speakers in the gymnasium were upgraded and the flooring project continues in the common areas and stairwells. The umbrella on the plaza was repaired after receiving storm damage.

Golf.  July was another successful month at the course with record numbers. The greens are doing well, and the course was treated with a seasonal application. The King of the Hill bracket tournament continued this month and the Sugar Hill Golf Association member/guest team tournament was held on the 18th of July. The 2-player team blind draw tournament is scheduled for the 15th of August. For more information on the course or membership, contact a representative from the Golf Course at 770-271-0519.

Private Rentals. Two rentals were hosted in The Bowl, one in The Eagle and one on the Promenade in the month of July. The rentals were a variety of event types ranging from a fitness competition, to a dance recital, a youth-led panel discussion and a downtown business’s birthday celebration. All events were held following proper social distance guidelines and we estimate the total combined attendance for these four events to be around 800-1000 people.

A 5K was held on the 8th with another one scheduled for the 22nd of August. A dance recital was held in The Bowl on the 8th as well and a private rental is scheduled to be held on the Plaza on the 19th of the month. We hope to have some food trucks and activities in The Bowl and on the Plaza in place of the cancelled Splash Night. Maintenance and upgrades continue to occur throughout The Eagle Theatre during this brief down time. One of those projects is an application of black epoxy with gold flakes to the gallery floors providing a more finished appearance. We hope to open the gallery as additional rental space once renovations are complete.

Concerts. All five concerts in The Bowl concert series have been rescheduled to 2021 dates. For more information on the fall, winter and spring 2021 events schedule, please visit www.thebowlatsugarhill.com and www.eagleatsugarhill.com

Downtown Ducks. The announcement of the final names selected through a community vote of the newest downtown residents is planned for the 14th of August. At the beginning of next week, Sugar Hill rubber ducks will be available for purchase at www.shopsugarhill.com as souvenirs celebrating the future arrival of our new downtown residents. This will also serve as a fundraiser for the Gwinnett Tech Foundation on behalf of the Parker Killian Gives Moore Veterinary Technician scholarship. Thanks to Quantum Bank for their sponsorship and contribution.

Communications. Mike Ramirez, a student at the University of Georgia, completed his summer communications internship with the Economic Development Department in early August. Mike’s work to craft and strategize marketing content was invaluable and we wish him the best as he works to complete his degree.

Gas Department.  The total number of transmitters installed on our automated metering system is now at 4,703 – just over 40% of our total active meter count. Our utility locating staff completed services on 582 sites for the month and worked with our construction contractors on various sites around the city to protect our underground utilities. Staff has been working through regulatory compliance tasks, new service installations, and 90 other service requests to round out the workload last month.

Street & Stormwater Department.  The Street Department cleared trees at Emory Drive, South Roberts Drive, Sycamore and from Appling Road blown down by recent storms. The staff delivered 9 loads of mulch and provided 8 dumpster rentals during the reporting period. Yard debris collection and other sanitation services continued in July at a frequency of one time per month. A total of 128 loads of bagged yard debris were collected and along with the chipped debris, produced 14 loads to the disposal site in Gainesville. During August, our staff is moving into a new cycle, providing collection for chipping every other week, moving back toward our regular schedule as staffing and service contracts have improved.

E Center.   Trim out of the new floor finish is nearing completion with touch-up painting and cleaning as remaining tasks. Warranty work on the fountain sand filter and clerestory windows are being closed out or scheduled, respectively.

Peachtree Industrial Greenway Trail Project.  The general contractor, Ohmshiv, has completed almost 90% of the work along Peachtree Industrial Boulevard and will still have guardrail to relocate and ADA ramps to install before fully completing this segment.

Whitehead Road Greenway Trail Segment.  Remaining items are being scheduled and coordinated with the county and a property owner prior to remobilizing from Peachtree Industrial Boulevard. This portion of the greenway will tie-in the recently completed contract with the Chattahoochee Group. Ohmshiv Construction will be building this scope along with that portion on Peachtree Industrial Boulevard.

Sugar Hill (Main) Greenway Trail.  The construction contract has been awarded and work is being scheduled to begin later this summer. A pre-construction meeting will be scheduled at the end of August.

Veterans Memorial Relocation.  The warranty period has begun, and a few remaining items are being corrected, adjusted, or replaced.

Gary Pirkle Park Field Improvements.  The construction contract has been awarded and a pre-construction meeting was held to get the ball rolling on this project. Construction is expected to begin in August. The work is being coordinated with the various user groups, leagues, and programs in the park to minimize disruption.

Art/History Room Buildout – Broadstone Project.  Bids were received in early August and are under review.

Public Meetings. The next public information meeting for the Chattahoochee River District will be held virtually on August 18th from 6:00-7:00 PM.