Eight single-family home permits were issued in the month of August, with an average square footage of 2,606.

In the month of August, 171 building inspections were accomplished; nearly half the amount (339) performed in the same month last year. Year-to-date, 1,628 building inspections have been conducted which is a reduction of nearly 70% from the 2,389 completed at this time in 2019.

A total of 457 zoning and property maintenance code inspections were carried out during the month of August, a decrease from the 543 performed in August of 2019. Year-to-date, 523 more code compliance inspections have been performed for a total of 3,642. 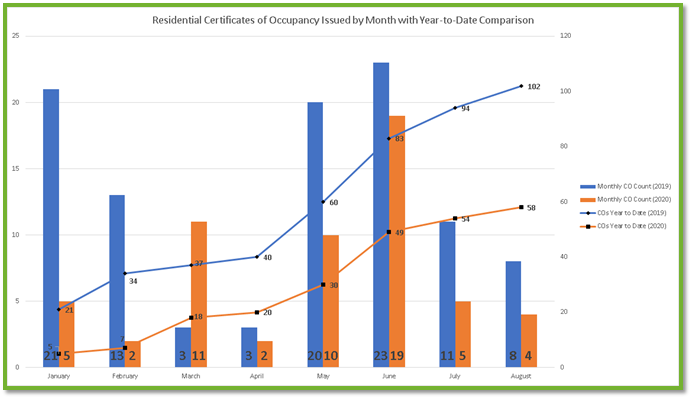 Several new projects are underway, including the field improvements at Gary Pirkle Park, the remodel for Sugar Hill Distillery in the old community center, and small commercial remodels for incoming medical practices in the Publix shopping center and at 4,749 Nelson Brogdon Boulevard.

Design review and variance applications were also submitted for the Northwest corner of Highway 20 and Sycamore Road. The applicant proposes the placement of a Lidl grocery on the site. Variance requests include increasing the setback for the Central Business District, increasing façade segments, and other façade alterations. 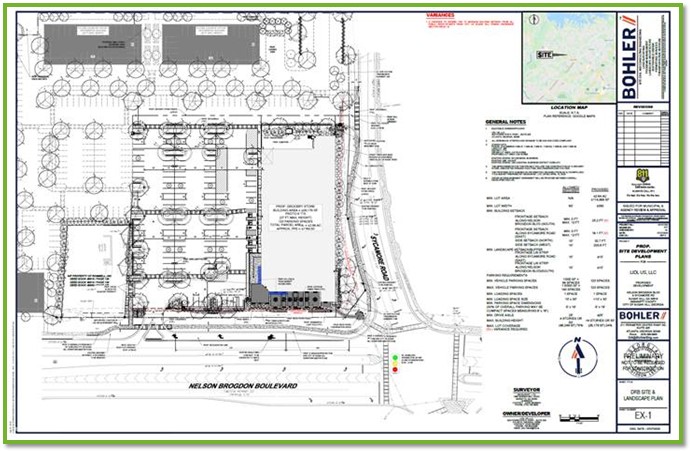 Parks.  Regular maintenance was completed throughout Gary Pirkle Park. The playground equipment was thoroughly cleaned and sanitized.  The synthetic turf was swept and cleaned in preparation for the beginning of football season. A thorough review of field and facility rental was initiated in August and is expected to result in better protections for our guests, staff, and program participants when finalized.

Downtown and City Hall. Weekly maintenance occurred throughout the downtown area. Weeds around the entire campus were treated, and fresh mulch was applied in the plant beds at city hall and the E Center. Our newest downtown residents, Walter, Gracie, Sugar and Shine, are adapting nicely in their new home in the pond.

E Center. The gymnasium continues to operate consistent with and monitoring the ever-changing public health regulations. There are currently 11,147 members. Regular cleaning continues daily throughout the facility. A few health and fitness classes have resumed with additional classes expected to slowly return over the coming months. The Waterfall Banquet Room and the classroom was rented for several training events, HOA meetings and coaches’ meetings.  The flooring project continues in common areas and stairwells.

Golf.  August was another successful month at the course with record revenue totals. The greens are responding nicely to the summer care program. The King of the Hill bracket tournament continued this month and the Sugar Hill Golf Association tournament was held on the 15th of August. The NET Championship tournament is scheduled for the 19th of September. For more information on the course or membership, contact a representative from the Golf Course at 770-271-0519.

Live Music and Movie Events. On August 28th, live music was offered on the promenade from 6:00-8:30 PM with a showing of the movie, Frozen 2 in The Bowl immediately following. Guests were encouraged to properly social distance and wear face coverings. Popcorn was available at the new concessions area in The Bowl and guests enjoyed food and drinks from the local restaurants. The City’s Events Team received a surprising amount of positive feedback about the events. The Events Department has another music and movie night planned on the Promenade and in The Bowl on Friday, the 18th of September. A poll will be shared on social media allowing fans to vote for their favorite movie choice. Information about the event will be publicly shared through our social media platform as well. A live music event is also scheduled for the 23rd of September.

Other Events. During the month of August, downtown was the scene of several private rentals to include two 5K events, two downtown events and one event at The Eagle Theatre.

Several events, both city-sponsored and private, are planned for September. Gwinnett Church rented The Bowl on September 9th to record live music for their upcoming online worship sessions. Southern Muscle Association is expected to rent space in The Eagle Theatre for a fitness competition on the 19th of September. A professional development organization has reserved the Plaza on September 25th and The Bowl on September 25th and 26th for an in-person and online conference. Applications to be an online vendor for Sugar Rush close on September 24th and the online market will open on the 1st of October.

In early October there are private rentals in The Bowl on the 3rd and 10th of October. The Events team will be starting live events on Friday, October 2nd and the full schedule will be available online in the next two weeks.

Rubber Duck Fundraiser. The City of Sugar Hill has partnered with the Gwinnett Tech Foundation and Quantum Bank to raise funds for the Parker Killian GIVES Moore Scholarship. The scholarship supports up to 5 veterinary technician students with their books and class fees. To raise the funds, we will be selling Sugar Hill branded rubber ducks for $3.00 at our online merchandise store. Quantum will be matching $1.00 of every duck sold to help us reach our fundraising goal. Also available online will be an option to donate a sum larger than the $3.00 duck purchase. 100% of the proceeds and donations will go to the scholarship foundation.

Gas Department.  The total number of transmitters installed on our automated metering system is closing in on 5,000 with 4,959 installed – some 43% of our total active meter count. Our utility locating staff completed services on 584 sites for the month and worked with our construction contractors on various sites around the city to protect our underground utilities. Staff has been working through regulatory compliance tasks, new service installations, and 80 other service requests to round out the workload last month.

Street & Stormwater Department.  The staff delivered 3 loads of mulch, 4 loads of rip rap (rock) and provided 2 dumpster rentals during the reporting period. A total of 134 loads of bagged yard debris were collected and along with the chipped debris, produced 11 loads to the disposal site in Gainesville. During August, our staff transitioned to a new cycle, providing collection for chipping every other week, moving closer toward our regular schedule as staffing and service contracts have improved.

E Center.   Trim out of the new floor finish is nearing completion with touch-up painting and cleaning as remaining tasks. Warranty work on the clerestory windows is being scheduled to close out New South’s role at the project.

Peachtree Industrial Greenway Trail Project.  The general contractor, Ohmshiv, has completed almost 90% of the work along Peachtree Industrial Boulevard and will still have guardrail to relocate and ADA ramps to install before fully completing this segment.

Sugar Hill (Main) Greenway Trail.  The construction contract has been awarded and the contractor’s preconstruction team is assembling submittal data and documents necessary to release the project to construction. A pre-construction meeting to review contract documents, permit status, and submittal schedules has pushed the start date to the first week of October.

Veterans Memorial Relocation.  The warranty period has begun, and a few remaining items are being corrected, adjusted, or replaced.

Gary Pirkle Park Field Improvements.   Construction began in August with erosion control, clearing limit fencing, contractor mobilization, and access improvements to the work zone having been completed. The work is being coordinated with the various user groups, leagues, and programs in the park to minimize disruption.

Art/History Room Buildout – Broadstone Project.  A recommendation for contract award has been prepared and will be presented to city council at the September meeting.