Permits/Inspections.  During the month of March, three single family home permits were issued for the Northmark Subdivision, each averaging 2,872 square feet. The CO for Jersey Mike’s Subs (adjacent to Publix) was issued during the month of March, and they are now open for business. The new Brogdon Distribution Center at 783 Brogdon Road is slated to be a Lowe’s Distribution Center and remodeling for the project is currently underway. The Sugar Hill Distribution Center at 655 Peachtree Industrial Boulevard is now host to Empire Flooring as well as Sargent and Greenleaf. Remodels for both new businesses are currently underway. 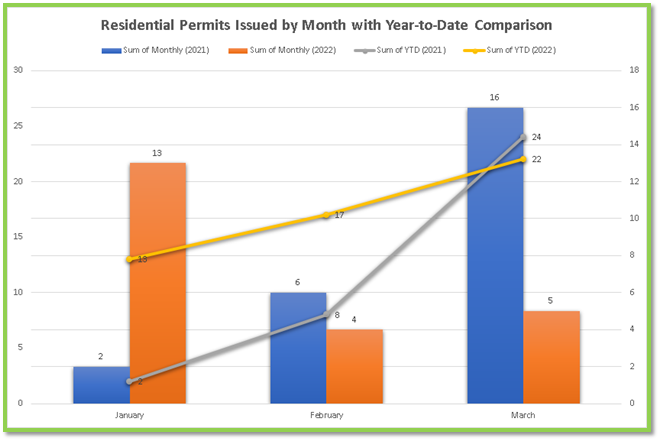 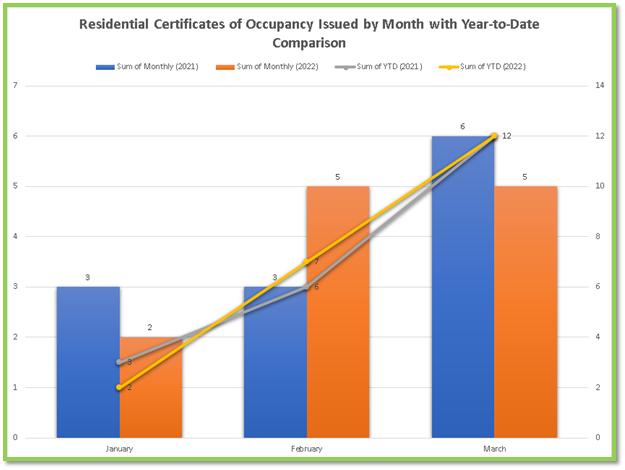 Two rezoning applications were received this month, both for parcels on East Broad Street. The applicant is requesting the parcels be rezoned to RS-100, allowing for 2, 2-story single family homes at approximately 2,600 square feet each.

The County has been issued a permit to perform sewer extension work at Parkview/Pinecrest. The scope of work is shown here.

The Solis project directly next to City Hall is now well underway with all permits issued. Work is expected to commence soon for the Lidl project on the northwest corner of 20 and Sycamore Road. Kittle Homes has a pre-construction meeting tomorrow morning on their brownstone development at the corner of Highway 20, Hillcrest and West Broad Street. 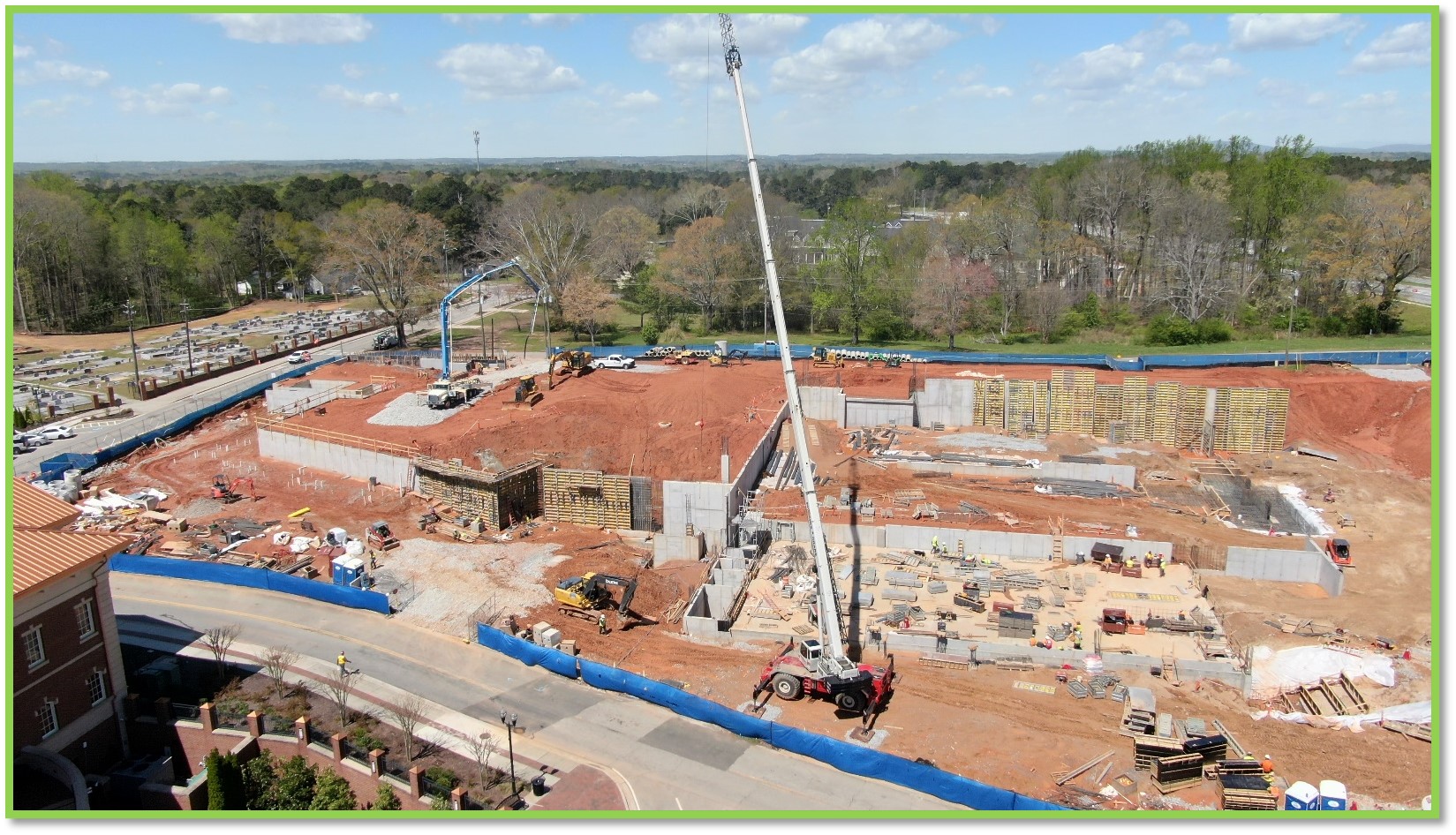 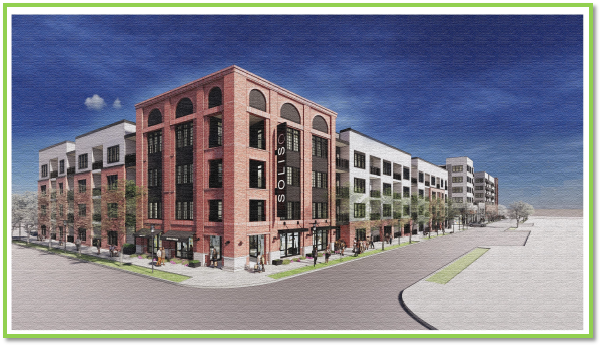 The Marshal’s office continues to meet with local law enforcement agencies to build working relationships. This will be beneficial for future training opportunities. Several abandoned vehicles have been towed throughout the city. The department welcomes Sydney Sears to the department. Sydney serves as the Administrative Assistant to the Chief Marshal. Khamathanh Thongkoth (KT) comes to us from the City of Atlanta and MARTA and Tommy McElroy comes to us from the City of Gainesville. Both will join the department in mid-April as City Marshals. Three of the department’s five vehicles have arrived and are currently being outfitted and will soon be on the road performing patrols. The team is currently obtaining quotes for additional equipment and uniforms. Paradigm Security Services began their patrols for the city on the 15th of March.

Parks. All-In Futbol Club and i9 Sports began their spring season while Georgia Force Football held several spring workout sessions. The new sign package for Gary Pirkle Park is in production. 96 plots at the Community Garden were renewed and the Gardener’s Spring Meeting was held and was well attended. Staff worked with volunteers providing support during the Sweep the Hooch event.

Ice Rink. Deconstruction and removal of the rink and tent have been completed.  It was a successful season, and we look forward to the ice rink’s return in November.

Splash Park. Spring maintenance and cleaning began in preparation for the park’s opening in May.

E Center. Gym memberships have now surpassed 15,987. The Waterfall Room and classrooms have been occupied with many meetings and gatherings for both public and private groups.

Golf.  March continued the trend of another successful month at the golf course. The new driving range hitting area project was complete along with several others in preparation for the spring and summer season. A successful season-opening tournament was held on the 26th of March and the Triple 6 Sugar Hill Golf Association tournament is scheduled for April 23rd.  For more information on becoming a SHGA member or course information, contact our pro shop staff at the Golf Course by calling 770-271-0519.

Events. We announced our first concert of the season, The Mavericks, coming to The Bowl on the 10th of June. Tickets are on sale now www.thebowlatsugarhill.com.  Over the last month, The Eagle Theatre has had over 2,500 visitors to see dance recitals, movies, and musicals. April will bring back Sugar Hill Live on the Promenade, featuring live music from local artists starting the 20th of April. There will be several rentals in The Bowl ranging from Sugar Hill Church’s Annual Easter Sunrise service to North Gwinnett Middle School’s spring dance recital.

Community. Be sure to visit our downtown businesses this Easter weekend, beginning Thursday, April 14th, for a chance to win a discount or treat hidden in colored eggs around Downtown Sugar Hill. Prizes such as $20 off at Perazim or a Sugar Hill coffee cup could be yours.

Gas Department.  We have installed 7,865 transmitters in our AMR system to date, adding some 180 to the total during the last month. Our utility locating staff completed services on 544 sites up slightly from February and worked with our construction contractors on various sites around the city to protect our underground utilities. Staff has been working through regulatory compliance tasks, new service installations, and 74 other service requests to round out the workload last month.

Street & Stormwater Department.  Yard debris operations delivered 11 loads of mulch and had 114 truckloads of bagged clippings collected. This resulted in 2 loads of debris to the disposal site. We had 4 open-top dumpster rentals, with no increase from February. The stormwater staff kept busy with our regulatory compliance program inspections along with pre- and post-storm event drain cleaning. The right-of-way maintenance crews assisted with cemetery work and preparation for the next phase of construction in the Historic Downtown Cemetery.

Sugar Hill Greenway Trail.  Paving along the segment between Peachtree Industrial Boulevard and Level Creek Road has been completed, while TriScapes, the city’s contractor, works to grade the shoulders and get any remaining disturbed areas stabilized with mulch. The connections from the asphalt sections to PIB and to Level Creek Road have just been completed.

Another key milestone achieved at the end of last month is the delivery and installation of Bridge #2 shown below. This bridge is the longest on the project and spans Level Creek’s floodway. The boardwalks are being readied for installation leading up to this bridge as well as another segment closer to Gold Mine Park. 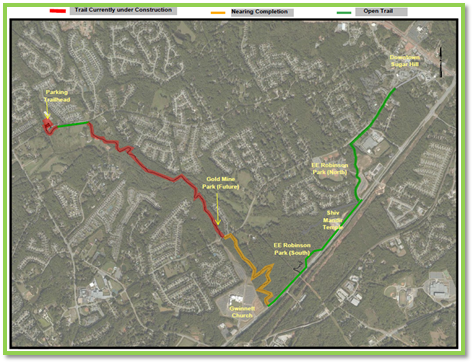 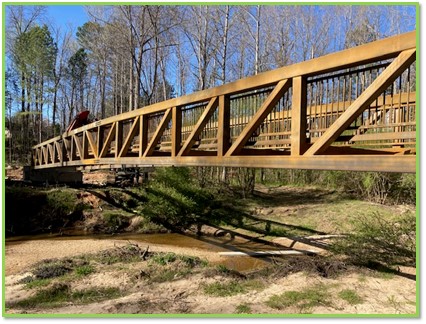 Many of the project’s natural segments follow the old Georgia DOT right-of-way for the outer perimeter, taking visitors through many of the most scenic places in the city that could have been a six-lane highway through the city. A pedestrian crossing signal has been installed on Level Creek Road near the back entrance to Gwinnett Church where the trail will cross (just south/west of Markim Forest subdivision). The signal, at the entrance to the city’s newest park, Gold Mine Park, will be activated once the trail is closer to completion and the county approves the signal installation. 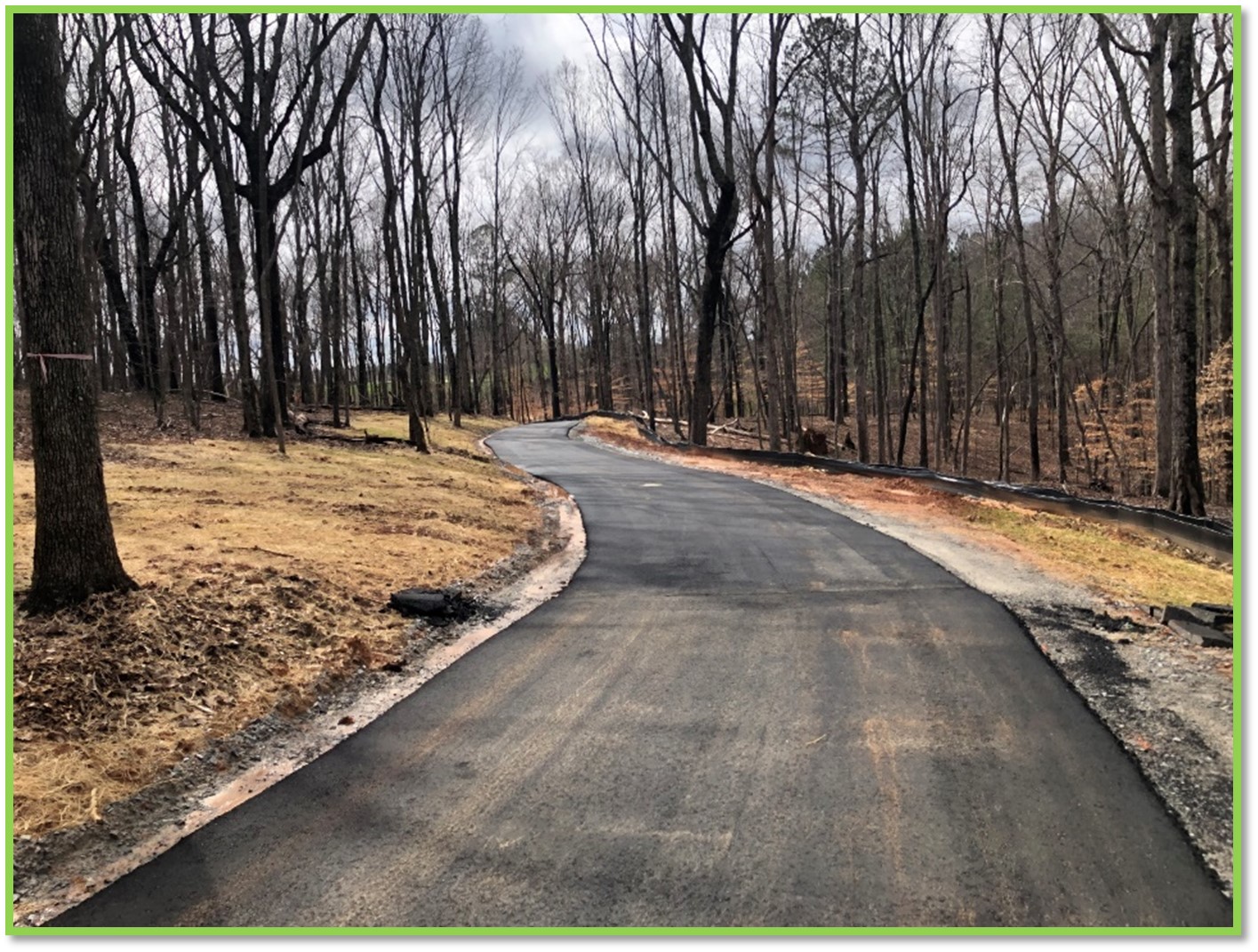 Gold Mine Park.  TriScapes was awarded the contract and is making progress on the small (2.4 acre with 7 acres of greenspace), but important park. The restroom building has been delivered and set with utility connections made to service the building. The pad-mounted transformer has been installed along with the sewer lift station. Site utilities have been run throughout the site as well. The park will have some 50 parking spaces, a restroom, bicycle racks, and information about the cultural and historical significance of the area.

E Center Event Space.  The city’s contractor on the E Center Event Space and Conference Room, Barnsley Construction, has installed the subgrade utilities, poured the slab, and laid the block for the exterior walls. This month, the interior framing, rough trades, and utilities have been run for the small meeting space proposed to be in the northeast corner of the parking level at the E Center. The space will consist of two areas that can be used for classes, meetings, or events. These areas can be rented by public or private parties. 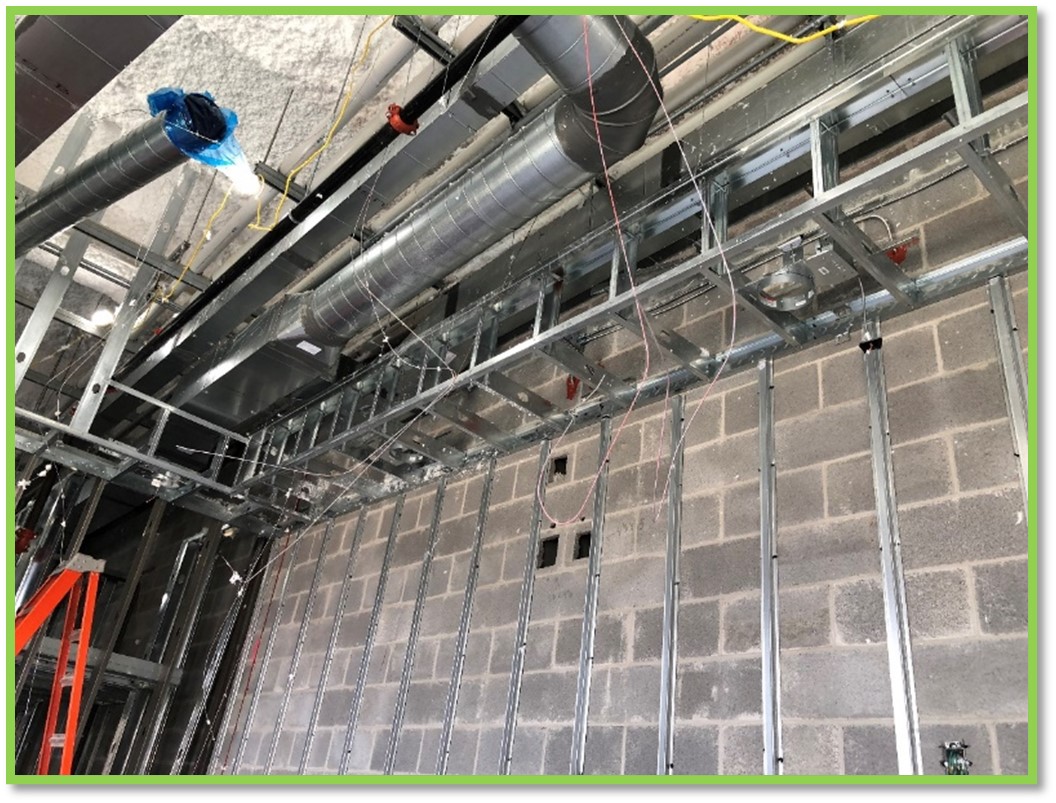 Interior framing and ductwork for the conference room 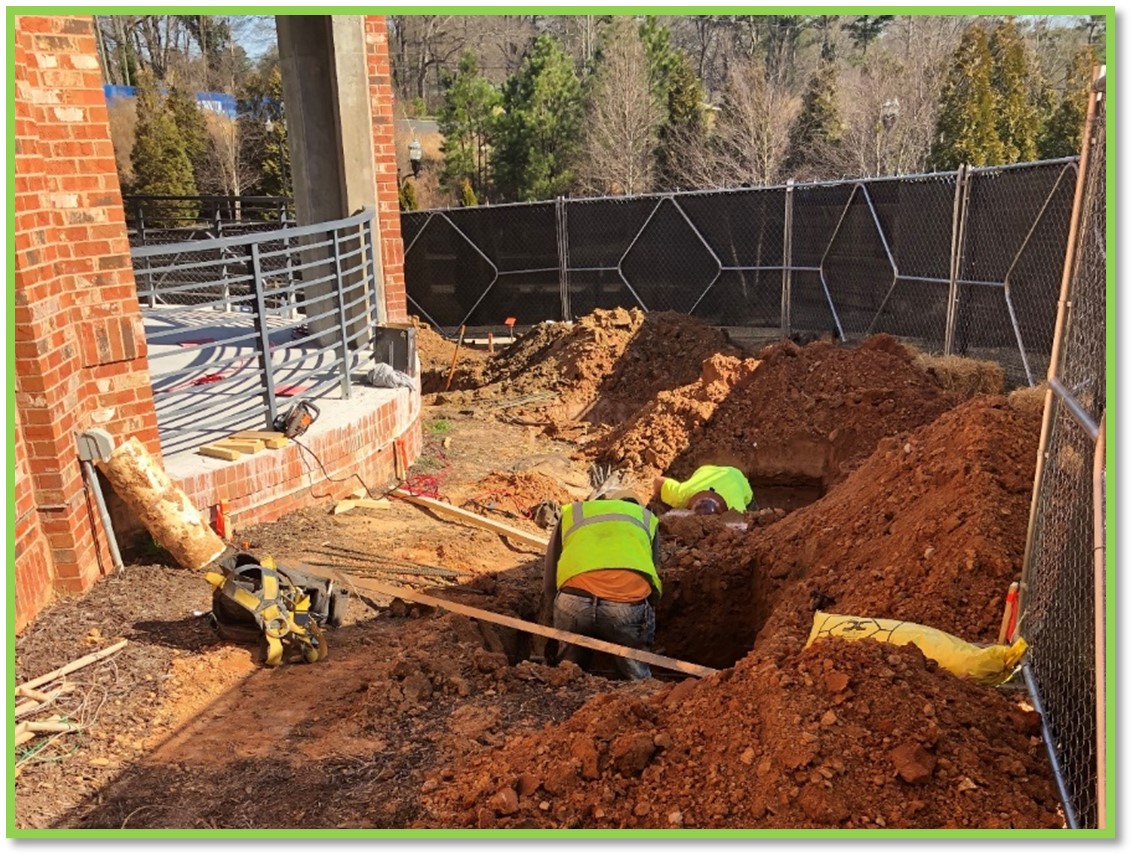 Footings for the small balcony

The public will notice walls and brickwork being installed as well as an outside patio area with iron awnings, like those on the promenade of the E Center. The contractor is working diligently to deliver a completed project by the middle of July 2022. 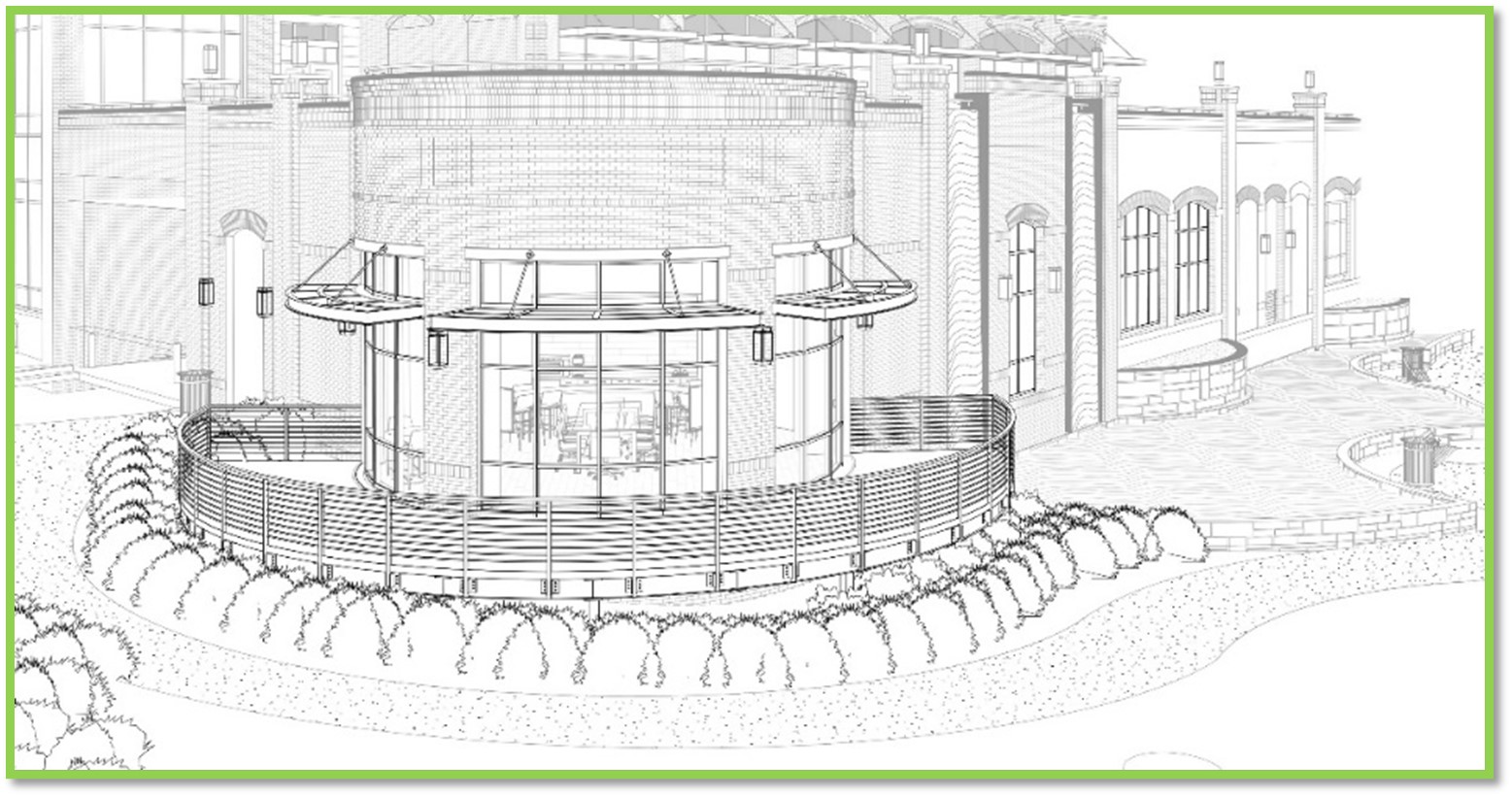