Downtown Master Plan/Livable Centers Initiative. The City of Sugar Hill would like to thank those that participated in the 2018 Downtown Master Plan update. The city’s Livable Centers Initiative (LCI) Plan is critical to advancing our vision toward a vibrant, walkable community in downtown Sugar Hill. This plan allows city leaders to make informed planning decisions focusing on the expansion of the downtown core, housing needs, pedestrian and bike mobility strategies, and land use policies. For the finalized LCI plan, visit www.cityofsugarhill.com/2018lciplan/ 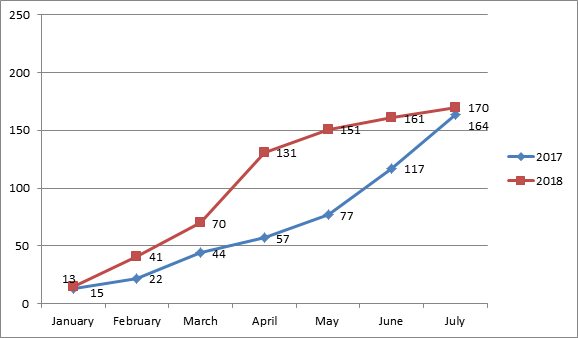 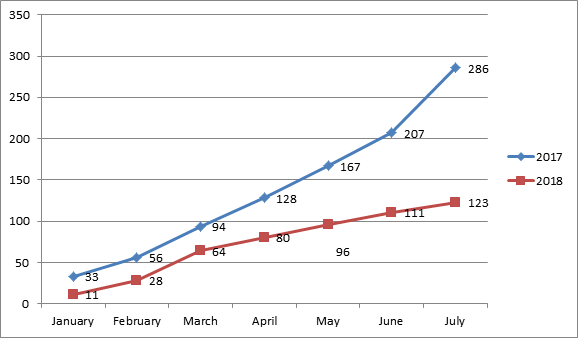 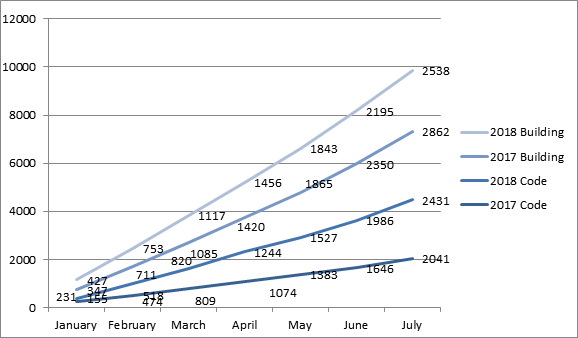 Parks.  Weekly maintenance was completed throughout Gary Pirkle Park and the Community Garden. Staff trimmed hedges and trees and sprayed herbicide throughout the park. A broken pipe was repaired at the garden with assistance from Gas Department staff. Picnic tables were repaired throughout the park as well. Staff collaborated with Sugar Hill Church members for a community work day as they painted fences and did light landscape work.

Downtown and City Hall. Weekly maintenance throughout downtown was completed to include City Hall, The Bowl, the Town Green and the Community Plaza. The cemetery was mowed and cleaned as well. The downtown beautification project was completed as fresh landscaping was added in front of city hall and all along West Broad Street.

Splash Park. Several minor repairs were performed at the park over the past month. Another successful Splash Night was held at the park on July 27th where guests enjoyed a variety of food trucks, entertainment and generously donated school supplies for those in need.  The last Splash Night of the season will be held on August 31st.

Golf.  This past month was another busy month as the warm weather trends continued. New poles and protective netting were installed at the bottom of the driving range to collect balls. Greens were sanded and brushed several times to assist in creating a firmer and more flat green putting surface. The Sugar Hill Golf Association held a tournament on July 21st, and over thirty players enjoyed the wonderful team event.  The next Sugar Hill Golf Association tournament is scheduled for August 18th, and 19th and the Sugar Hill Business Alliance benefit tournament is scheduled for August 24th.

E Center.  Three more leases for the E Center are expected to be finalized by the end of the month. Marketing efforts for the center are well underway to include websites, social media pages, and business highlights. As leasing is finalized, business spotlights for each of the businesses in the E Center will be released to the public. The city hosted several tours of the development for leaders from the cities of Hahira and Smyrna and representatives from Partnership Gwinnett. Articles featuring the project were published in the Gwinnett Daily Post and the North Gwinnett Voice.

Suite Spot. Requests for tours of the space continues with consistent interest and a growing waiting list for premium membership and office suites. The general co-working membership has increased over the past month as well. The Downtown Development Authority is in the process of reviewing improvement options for the façade to elevate street-level accessibility and to update the appearance of the building.

Community Connections. The first quarterly Community Round Table was held at the end of July. Leaders from Sugar Hill’s diverse community groups gathered to discuss opportunities for collaboration and idea sharing and to identify next steps in moving projects forward.

Youth Council. Applications for the 2018-2019 Youth Council are now being accepted. There are three open positions on the council and students from all high schools in Sugar Hill are encouraged to apply. The deadline for application submittal is August 24th. For more information or to apply, visit www.cityofsugarhill.com/youth-council.

This past month began with a very successful Sparks in the Park event held on July 3rd. The Bowl hosted Vertical Horizon and Fastball on the 14th. The city also hosted its second free Splash Night of the season on July 31st where guests enjoyed a variety of food trucks, music, and a movie. The last Splash Night of the season is planned for August 31st and will feature a live band and another movie. A number of exciting upcoming events are just around the corner as Lanier High School plans to hold their first pep rally of the year at The Bowl on August 16th to get their football season started. Michael Bolton will the next to grace The Bowl stage on August 25th. Tickets are still available and can be purchased by visiting www.thebowlatsugarhill.com.

On the subject of personnel, we are pleased to announce that Ms. Avery Simmons will be coming on board as the new Community Events Coordinator. She is a Georgia College and State University graduate and a local resident who loves events and working with people. We are excited to add her to the team.

Gas Department.  The Gas Department staff has now installed over 2,200 transmitters in the automated meter reading system to date, accomplishing our annual goal a few months ahead of schedule.  Our staff completed utility-locate services on 709 sites for the month. Regulatory compliance inspections, new service installations, and 131 other service requests were also completed to round out the workload in June.

Street & Stormwater Department.  The second round of mosquito spraying was completed in the month of July along with our regular complement of stormwater inspections for regulatory compliance.  Yard debris collection, storm debris removal, mowing, and storm drain maintenance continues to keep the department staff busy. Stormwater and development inspections continue to keep pace with the building and development industry for our area as well.

E Center.  The ‘Eagle’ marquee has been installed and is being connected for display during the final weeks of July.  The marquee has not only the tall blade structure to be powered and lighted, but also LED display boards, static changeable copy traditional displays, and a myriad of bulbs and lights.  The sign captures the architectural style of the building and certainly makes a statement being visible from the Highway 20 and Peachtree Industrial intersection. New South is in the final stages of inspection with the fire marshal’s office to obtain certificates of occupancy as a few final project components finish up.  Landscaping and outside work is about two weeks behind completion of the buildings and should wrap up at the end of August.  Leasing has been strong with several tenants ready for build-out.

Sidewalks Projects – Whitehead and Suwanee Dam Roads. Design work is complete on two SPLOST-funded sidewalk projects in the area and the project has been advertised for bid.  Bids are due at the end of August.  These projects are expected to begin construction later this summer with both together adding some 5.5 miles of new sidewalk to our network of pedestrian facilities.

LMIG Annual Resurfacing Program.  The two-year cycle of road repairs and repaving is being finalized for bidding.  The bid phase will extend into September and construction will be authorized once the bids are opened, contract awarded, and work can be scheduled, perhaps as late as spring of next year.  The roads included in the next iteration of improvements are as follows:

Sugar Hill Greenway.  The final design is in review before we ramp up the permitting phase while right-of-way acquisition continues.  There are some 26 parcels required in Phase 1 of the project and discussions are ongoing with the owners to provide clearance for the proposed trail.  The first phase of the greenway project will connect downtown with the two parks on Level Creek and further to Whitehead Road, via Georgia DOT property in the area, a distance of nearly five miles.