A development permit application for the Broadstone mixed-use project was received located across from city hall. The facility will contain 311 living units and 13,000 square feet of retail, amenity and restaurant space.

A commercial remodel permit was issued for The Joint Chiropractic, a 1,600 square foot practice to be located in the Publix Shopping Center. 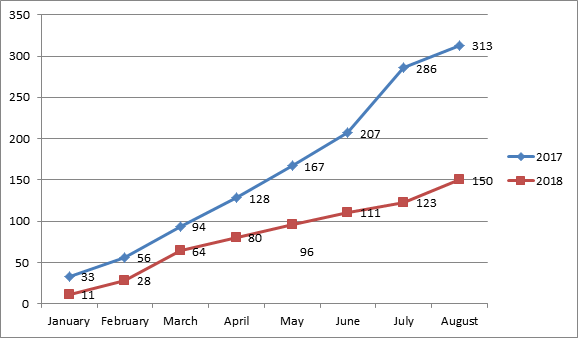 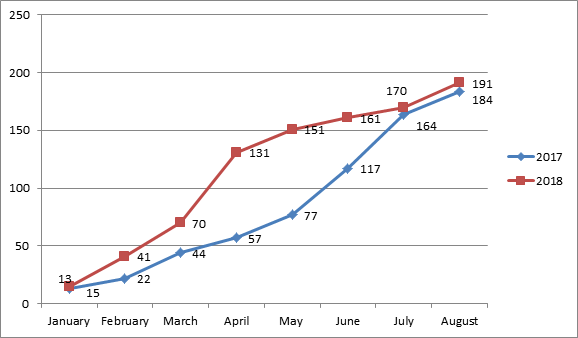 There were 376 zoning and property maintenance code inspections carried out this August, a decrease from the 443 performed in August of 2017.  This year has seen an increase in code inspections, with about 15 percent more being performed year-to-date. 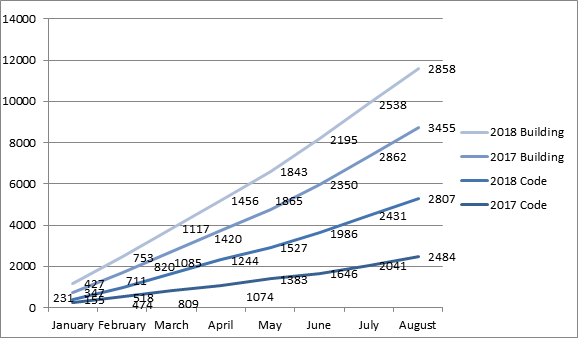 Parks.  Gary Pirkle Park and the Community Garden continue to see interest, participation and use during the end of the summer months and early fall.  Sports leagues are active at the park in the evenings and on weekends throughout this busy time.  Groups like the All-In Futbol Club, Georgia Force, and i9 continue to make use of the facilities during this season.

Downtown and City Hall. Weekly maintenance throughout downtown was completed to include City Hall, The Bowl, the Town Green and the Community Plaza. The cemetery was mowed and cleaned as well. The downtown landscaping project along West Broad Street is continuing to grow-in.

Splash Park.  August 31st was the last Splash Night of the season and was very well attended.   The weather and entertainment complemented the family-friendly atmosphere.  The facility is continuing to be the focus of some much-needed maintenance as the summer season winds down.

Golf.  After some minor adjustments to the new poles and protective netting at the bottom of the driving range, balls are staying in the range area and staff is pleased with the installation. Several tournaments along with cooperative weather conditions contributed to a strong month with over 2,000 players for the month.

E Center.  Sugar Hill hosted a group from the Georgia Downtown Association Conference as part of their tour of cities. The group enjoyed a tour of the E Center as well as The Bowl and The Splash Park. Leasing continues to be strong as the final lease opportunities in the E Center are considered by businesses. A new lease for Indio Brewing, a microbrewery that will be located on the promenade with views of the amenity pond, was approved by the DDA. Tours for interested businesses as well as tenants and their contractors continue in anticipation of completion of the project and grand openings for new businesses in Sugar Hill.

Suite Spot. Tours and interest continue with a growing waiting list for office suites and premium memberships. Staff continues to collaborate with other leaders in the business incubator community to share ideas for programing and space design.

Community Connections. Britley Jones, a senior from Lanier High School, has joined the Economic Development Department as an intern. Her interests are focused towards economic impact and community planning. She will be supporting several projects in the department during her internship including website design updates, marketing, and community engagement.

Marketing. Sugar Hill’s approach to downtown development will be highlighted in a publication of case studies produced by UGA’s Carl Vinson Institute of Government after an interview with their staff highlighting public and private development projects in the city. Sugar Hill was featured in the Gwinnett Cities Guide and the Georgia Trend publication. Sugar Rush will be featured in Suwanee Magazine, The DiG and the North Gwinnett Voice.

Youth Council. The 2018-2019 youth council candidates have been selected. Five of the former youth council members returned from last year, leaving only three spaces. The selection process was challenging as we received many well-written applications from several extremely promising students. All selected students have been notified and will be recognized at the city council meeting in September.

This month, The Show Business, a private group, began a series of tribute band concerts including Departure, a Journey tribute band on September 8th, Rumours, a Fleetwood Mac tribute band on September 29th and Headgames, a Foreigner tribute band, on October 13th. Tickets are available to the two upcoming shows on thebowlatsugarhill.com. A 5K benefit run, Jogging for Jambos, will take place on Saturday September15th and VIDA Atlanta will host VIDA Fest for the 4th time in downtown Sugar Hill for a day of Latin culture including vendors, music and food on September 22nd.  The Gwinnett Chamber will host their Business After Hours event in City Hall on September 20th and we would like to encourage all local businesses to attend and network.

Other upcoming events include Sugar Rush on October 20th, a concert featuring Don Felder, formerly of The Eagles on October 26th and The Importance of Being Earnest, a production presented by The Players Guild on November 2nd.

Gas Department.  The Gas Department staff has now installed 2,332 transmitters in the automated meter reading system as of the end of the month.  Our staff completed utility-locate services on 684 sites for the month. Regulatory compliance inspections, new service installations, and 82 other service requests were also completed to round out the workload last month.

E Center.  Paving, water feature construction and streetscaping have been the focus of much of the outside work during the last month at the project site.  The furniture has been delivered as have much of the equipment ordered for the new facility.  The glass wall panels on the rooftop bar were installed this month along with the screen wall at the same location of the project. Two of the tenants have begun construction on the buildout of their spaces and we are looking to release a few others in the coming weeks. The flooring in the gym was completed in August as the running track surface was just getting started.  The project also received temporary certificates of occupancy in August as well.  The contractor is making their way through preliminary punch lists as they converge on substantial completion.

Sidewalks Projects – Whitehead and Suwanee Dam Roads. The SPLOST-funded project which will add some 5.5 miles of new sidewalk to our network of pedestrian facilities was bid out last month and the bids are currently in review.  This work is jointly-funded with the County and will link key destinations in and around the city.

LMIG Annual Resurfacing Program.  The two-year cycle of road repairs and repaving is currently advertised for bid with a due date of September 11.  The project will be authorized for construction once the bids are opened, contract awarded, and work can be scheduled, perhaps as late as spring of next year.  The roads included in the next iteration of improvements are as follows:

Sugar Hill Greenway.  The final design is now in the permitting phase while right-of-way acquisition continues.  There are some 26 parcels required in Phase 1 of the project and discussions are ongoing with the owners to provide clearance for the proposed trail.  The first phase of the greenway project will connect downtown with the two parks on Level Creek and further to Whitehead Road, via Georgia DOT property in the area, a distance of nearly five miles.