Planning. A final report summarizing the process and findings of the Highway 20 corridor study is available on the city’s website at www.cityofsugarhill.com/hwy20plan/. Significant work has gone into land use and real estate analysis as well as the vision and plans to encourage a parkway-like development that is equally inviting to both pedestrians and automobiles. 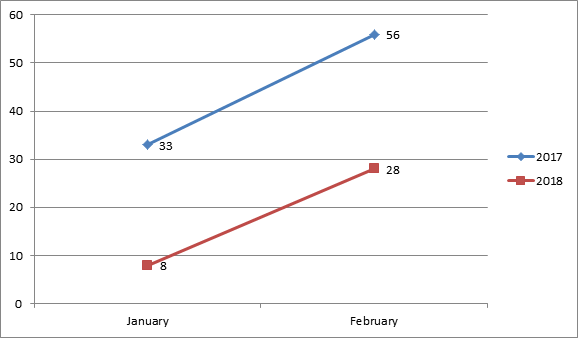 Parks.  Staff performed weekly maintenance and cleaning throughout Gary Pirkle Park. Areas throughout the park were treated for insects. Annual maintenance on the security camera system was performed and lighting repairs were completed around the playground and buildings. The water meter was installed at the Community Garden and the tie-in will occur in the next few weeks.

Downtown and City Hall. Weekly maintenance throughout downtown was completed. The areas around City Hall, The Bowl, the Town Green and the Community Plaza were treated for insects. Breakdown and removal of the Ice Rink was completed.

Golf.  Due to weather related issues, the course remained closed for a portion of the month. New irrigation improvements are in the planning stages. Several of these irrigation planning meetings were held in February and the process is expected to begin later this month. Replacement of the well motor and primer pump is expected to take place in the next few weeks. Annual repairs to the sand bunkers continued during the month as well. New caution signage was installed to alert golfers of hazards when driving carts. Annual cart maintenance was performed on the entire fleet. A successful Sugar Hill Golf Association Tournament was held this past Saturday with the next tournament planned for the 17th of March.

City promotional items are available for purchase at the customer service desk. These items include scarves, ear warmers, mugs, shirts, and the 2018 pint glasses.

Gas Department.  The gas department continues progress on our automated meter reading system with over 800 transmitters installed.  The system is being read manually until the software and hardware testing is complete later this quarter.  The transition to this new system will enable a more efficient and accurate process as well as reduce the risks associated with monthly meter access. The Department’s Public Awareness program is being evaluated for regulatory compliance and will be completed in March. Our staff also completed utility locate services on 505 sites this month.

Street & Stormwater Department.  Staff completed tree trimming along Peachtree Industrial Boulevard and some of the other rights-of-way to get ready for mowing season, clearing the areas of low-hanging branches and overhanging limbs.  Our mechanically-minded staff have also been creatively building a brine-sprayer to use for future winter storms in Sugar Hill, reducing local road icing potential.  The mowing teams started earlier than normal this year with the warm conditions in February contributing to right-of-ways greening up unusually early.  Stormwater and development inspections continue to keep pace with the building and development industry for our area as well.

E Center.  Brick and block masons have been busy this month placing the exterior on the theater and mixed-use buildings for the project.  The storefront windows and doors have also been installed for most of the project as well.  During the early part of 2018, the roofing sub-contractor has installed the top-layer of the built-up roof on both the theater and mixed-use portion of the project while making significant progress on the gymnasium. Utility rough-in work for the mechanical and electrical trades also moves forward toward the finish line as well.  Gypsum wallboard is being installed throughout the project giving the interior a closer appearance to the floorplan.  The signature architectural elements for the theater, stair towers, and gym roof are now giving the downtown Sugar Hill skyline a distinctive shape.  The project is getting closer to a number of key milestones associated with certificate of occupancy, water feature completion, and bridge installation in May.

Sidewalks on Peachtree Industrial Boulevard. The sidewalk from Spring Hill south to West Price Road has been completed.  The 1,600-linear foot segment in the middle of the project limits will comprise a portion of our new greenway project and is currently wrapping up construction.  Guardrail relocation and drainage structure installation are being scheduled between rainfall events in order to close out construction.

Sugar Hill Greenway.  The project is in the final construction documents stage and right-of-way acquisition continues.  There are some 26 parcels required in phase 1 of the project and discussions are ongoing with the owners to provide clearance for the proposed trail.  The first event associated with opening the greenway will be later next month leading up to earth day activities along the segment on Peachtree Industrial Boulevard.