Planning. A draft summarizing the process and findings of the Highway 20 corridor study is available on the city’s website at www.cityofsugarhill.com/hwy20plan/. Significant work has gone into land use and real estate analysis as well as envisioning the development potential of the entire corridor. 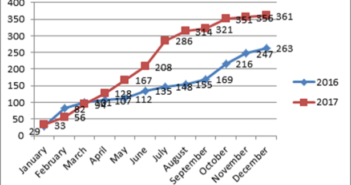 Parks.  Staff performed weekly maintenance and cleaning throughout Gary Pirkle Park. Repairs to water lines and the interior portions of the restrooms were completed.

Downtown and City Hall. Weekly maintenance throughout downtown was completed. The remainder of the holiday decorations were placed into storage. “No Fishing” signage was installed at the amenity pond.

Golf.  Due to weather related issues, the course was only open to the public for 15 days in January. Tarps were placed over the greens several days to protect them from the extreme cold temperatures. A new irrigation plan is in progress and several meetings were held over the past month to confirm the details. Annual repair projects for the sand bunkers and the golf carts are in progress and are expected to reach completion next month.  The Sugar Hill Golf Association held their annual kick-off party on Saturday, January 20th. The day started with a blind-draw 2-man event in the morning, with the annual meeting and luncheon held in the afternoon.

Events.  During the past month, the city hosted a 5K, a 10K and the city’s first half marathon. Staff has been working to finalize the concert series which is expected to be publicly announced within the next month. Sponsorship opportunities are now open for the concert season and several large companies have already confirmed their spot. Staff is working in collaboration with the Service Corps of Retired Executives, the Small Business Development Center and the Gwinnett Library to begin a series of educational courses to offer to Sugar Hill businesses at the Suite Spot.

Marketing/Communications.  The new Sugar Hill logoed merchandise is in and will be available to the public at the customer service counter during regular business hours. The items will be sold at events and concerts as well. Items include mugs, ear warmers, scarves, gloves, pint glasses and water bottles. Advertising materials are now complete for the Annual Easter Egg Hunt and the Art Commission show. Staff continues to create concepts for advertising the event and concert series. Materials such as calendars, posters, banners, coasters for local restaurants, magazines and newspaper ads will be used to promote these great events. Newsletters from 2004-2017 have now been archived and can be found on the city website along with each new edition published.

Gas Department.  The gas department is making progress on our automated meter reading system with close to 500 transmitters installed.  The system is being read manually until the software and hardware testing is complete later this quarter.  The transition to this new system will enable a more efficient and accurate process as well as reduce the risks associated with monthly meter access.  Our staff also completed utility locate services on 519 sites this month along with beginning the service installation associated with the City’s new E Center project.

Street & Stormwater Department.  Staff responded in exemplary fashion in advance of the winter storm Inga on the 17th and 18th clearing off the sidewalks at city hall enabling us to stay open during the holiday-shortened week.  In addition, our team was able to get the downed tree limbs and debris up from the storm quickly with many of the area businesses shut down and motorists off the roads.  Staff performed various stormwater inspections throughout the city to include private detention pond inspections for annual stormwater reporting.

E Center.  The crane has been demobilized from the site and the contractor’s focus is now on completing the exterior skin and roofing for the project.  While the masons and roofers work periodically through inclement weather, the interior framing and utility rough-in press on.  Gypsum wallboard is being installed throughout the project giving the interior a closer appearance to the floorplan.  The signature architectural elements are being completed with the glass stair tower roof designs, the barrel roof of the gymnasium and the theater marquis approach their finished shape.  We expect some exciting progress in the coming months as the exterior finishes are applied to the project and we get closer to a grand opening just around the corner.   A few key leases are being finalized and we anticipate being able to announce them soon.

Sidewalks on Peachtree Industrial Boulevard. Most of the sidewalk from Spring Hill south to West Price Road has been completed.  There is a 1,600-linear foot segment that will comprise a portion of our new greenway project which is being constructed now at a suitable width to accommodate the proposed use.  The guardrail relocation and drainage structure installation are being coordinated now to wrap up construction at the end of February.

Sugar Hill Greenway.  A Friends of the Greenway meeting was held on the 29th to update the group on the project as well as to present information on countywide trails planning by Commissioner Lynette Howard.  The project is in the final construction documents stage and right-of-way acquisition is currently underway.  There are some 26 parcels required in phase 1 of the project and discussions are ongoing with the owners to provide clearance for the proposed trail.