Planning. Work on the Highway 20 Corridor Study continued through the month of October. Draft recommendations will be ready for public review toward the middle of November. Our final public involvement event is scheduled for the evening of November 28 at city hall. Draft materials are still available for review and comment on the Planning Services page of the city’s website.

The downtown master plan update is well under way. Our first public involvement event kicked off the project at the Sugar Rush festival. Planning staff and our consultant hosted an information booth at which we answered questions and handed out information to the project page and survey on the city’s website. We also conducted two days of one-on-one interviews with key civic and business leaders to gain insight on the community’s vision for the future of our downtown development. For more information and to stay up to date on the project status, please visit: cityofsugarhill.com/2018lciplan 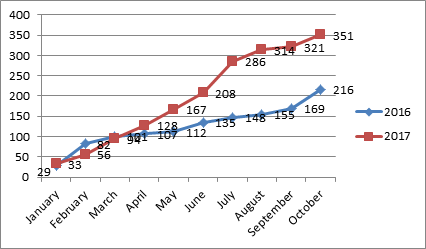 Parks.  Staff performed weekly maintenance and cleaning throughout Gary Pirkle Park. Repairs are underway on the entrance gate and eight new safety traffic bollards were installed recently. The Splash Park is now closed for the season and staff assisted on the final installation of the Ice Rink in preparation for its opening this past weekend.

Downtown and City Hall. Weekly maintenance throughout downtown was completed to include the installation of holiday decorations and lights around the Ice Rink and Community Plaza area. Fresh mulch was applied to the Town Green.

Golf.  Warmer than normal weather patterns contributed to good numbers for the month. One of the largest annual tournaments, The 10th Annual Big T 150 Golf Classic, was held on the 28th of October and brought 144 golfers to the course. The tournament raises scholarship money for qualified students of North Gwinnett High School in memory of Taylor Burdette. The Sugar Hill Cup Tournament was also held last month as well. All tee boxes, greens and green complexes were sprayed with herbicides, fungicides and fertilizers as part of the annual treatment program.

Events.  The 2017 Quantum National Bank concert series finished this month with Atlanta Rhythm Section on November 11th.  The season was successful with sold out shows and happy concert-goers.  This year’s lineup also included Collective Soul, Boz Scaggs, Josh Turner, Ben Folds, and KC & The Sunshine Band.  Staff is now working on plans for the next  series.  Look for the lineup announcement in early 2018.

The Annual Holiday Celebration and Tree Lighting will be held on Saturday, December 2nd from 5:30 PM to 8:30 PM on the Community Plaza.  Activities will include photos with Santa, a visit from The Grinch, a holiday market, fake snow for children to play in, carriage rides, food vendors, ice skating and performances from local musicians.

The Ice Rink @ Sugar Hill opened last Friday night.  This is the 4th season for the rink and staff is anticipating a successful one.   Visit www.icerinkatsugarhill.com for hours and ticket information.

Marketing/Communications.  The city’s social media pages continue to grow, with Facebook’s page views up 76% this month.  Over the past month, the city’s website has had over 1,700 new users.  Staff assisted the Planning Department in posting the survey for the Downtown Master Plan study.  The first wave of marketing this study was successful, bringing in over 200 surveys.

Street/Stormwater.  The street and stormwater crews were active during the month with continued debris removal and chipping in the aftermath of recent storms.  Chipping crews have been busy collecting yard debris due both because of seasonal demand along with storm-related demand.  Our very talented department staff has been completing an expansion to the offices at the shop allowing for more seating space for the breakroom, additional restrooms, as well as consolidating stormwater staff in one area.   Development and construction inspections have also been completed by our street and stormwater staff this month at Warrenton, Hadley Township, and along Peachtree Industrial.

Gas.  Staff is making significant progress on our meter reading upgrades with close to 200 accounts being changed over to the new system.  Manual reads will still be completed on these until the entire route can be converted over.  The upgrade program will follow a strategic five-year schedule, allowing each of the routes to be gradually absorbed into the system.  Gas department staff completed 77 work orders, 22 new service installations and 698 locates for the month.  Regulatory compliance documentation review and updates were completed this month on public awareness, operator qualification, operations & maintenance and emergency manuals.

E Center.  The crane continues to work its way toward the eastern end of the project as the steel columns and beams have been placed on the gymnasium portion of the project.  The elevated walking track above the floor of the gym is visible from the street as the bow trusses are being assembled to form the roof structure of the space.  The brick masons have started on the west elevation of the theater and will be making their way around the building before moving toward the mixed use portion of the project.  The interior framing is nearing completion along with the mechanical, electrical and plumbing trades completing their rough-in work.  The furniture, fixtures, equipment and finishes are now the focus of the project management team as we gear up for the final third of the project schedule.

Sugar Hill Greenway Project, Phase I.  The project is now fully into utility coordination and right-of-way acquisition as the design nears its conclusion.  The project management team is continuing to meet to determine a few alignment changes in areas not affected by easement acquisition.  The Friends of the Greenway group continues to be engaged in the design process and assist with details associated with trail signage, furnishings, and overall public involvement.

Gateway Sign at Peachtree Industrial Boulevard.  Just in time for the holidays and the opening of the RaceTrac store, the new gateway sign is permanently powered up and illuminated with landscaping installed.

Bowl Improvements 2.1.  Attendees to the Atlanta Rhythm Section Veteran’s Day concert last Saturday were treated to an upgraded audio/visual experience, pavers on the end sections of Row 9 and an extension of the ADA seating area.  A large, 62×100-inch LED monitor with 5mm pixel pitch was installed on the back of the suites, which allowed for pre-show entertainment.