Planning. A significant amount of work has gone into the Highway 20 corridor study and downtown master plan update this past month. A public workshop was hosted at city hall for each of the two planning projects. The Highway 20 study will wrap up in January and the downtown master plan update will conclude after the first quarter of 2018. Look for updated materials on the Planning Department’s webpage.

Development. Five single family home permits were issued in the month of November with an average square footage of 2,847. Year to date, there has been a 44% increase in residential permit issuance as compared to 2016 while the number of building inspections has increased 70% (2016=2,862 / 2017=4,890) 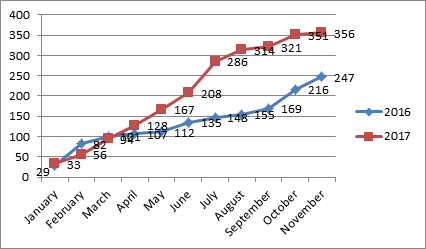 Inspections. A total of 261 zoning and property maintenance code inspections were carried out this November, an increase from the 195 performed in November of 2016. There has been a 23 percent rise in code enforcement inspections overall, with 3,274 inspections performed year to date.

Parks.  Staff performed weekly maintenance and cleaning throughout Gary Pirkle Park. Repairs are complete on the entrance gate. The board meeting for the Community Garden was held to discuss 2018 goals.

Downtown and City Hall. Weekly maintenance throughout downtown was completed. Staff assisted with the holiday decorations inside city hall. Both outdoor Christmas trees were installed and decorated. Staff continues to research quotes for the downtown landscaping beautification project.

Golf.  Although the weather over the past month has brought slower daily play, several large tournaments were held which brought many golfers to the course. The greens were painted for the winter. Repairs were performed on several pieces of kitchen equipment.

Events.  Staff is very pleased with the success of the 2017 event season.  It ended with the Holiday Celebration on December 2nd, which brought over 3,000 people out to ice skate; take photos with Santa, The Grinch and Cindy Lou Who, carriage rides and more.  Staff is working to plan next year’s concert lineup and event calendar, which is expected to be the best yet.

Marketing/Communications.  Staff is working on the 2018 marketing strategy.  In December, staff ordered a limited number of Christmas ornaments to give out to residents at city hall.  Staff is researching new promotional items for 2018 events as well as some new items to sell at the customer service desk.

Gas Department.  The staff in the gas department have been busy installing our automated meter reading system in one of our key routes and are gearing up for a transition to this new system in early 2018.  We are in the first year of our upgrade program which will enable us to reduce risks and inefficiencies associated with a manual read system.  In addition, we have continued in our compliance program, having recently passed two Public Service Commission inspections along with a practice-audit from the gas authority.  As construction progresses in the area, we also support our external customers with utility locate services on 535 sites this month.

Street & Stormwater Department.  The street and stormwater department have been busy getting ready for the upcoming winter season preparing equipment and vehicles for colder weather.  The landscaped medians of Peachtree Industrial and Highway 20 were also freshened up with new mulch.  Stormwater staff was also working on our permit compliance program, completing final inspections of new developments and annual inspections of stormwater facilities at commercial sites.  Our whole public works team deserves some acclaim in accomplishing a significant renovation project to the maintenance shop on Hillcrest Road predominantly using in-house labor and expertise.  The repairs are nearing completion and will allow for a better deployment of staff in street and stormwater services.  Improvements were also completed at the landfill, installing two additional monitoring wells required by changes in the EPD compliance program.

Bowl Improvements 2.1.  Construction was completed recently on improvements to Section A of The Bowl, allowing some additional 50 seats to the venue.  The additional work provided an additional suite, five more tables, and a better experience on all of Row 9 of the Bowl.

E Center.  Steel erection is winding down as the steel framework for the gymnasium took shape since the last update.  The roofing and exterior sheathing work has moved to the mixed-use portion of the project along with the interior framing and mechanical rough-in.  The brick masons are making quick work of the theater as they move toward the south elevation of that building and giving it a finished appearance.  The storefront windows and doors are also being installed ahead of the brick and also starts signaling the exterior finish and interior focus.

Sugar Hill Greenway. The project is in the late stages of preliminary plans with right-of-way acquisition currently in process.  The coordination with GDOT, utility and property owners is also underway.  Some adjustments to the alignment are being considered to make the grades work and to respond to public input along the way.  The layout along Level Creek Road has been staked to facilitate coordination during the acquisition process.