Fourteen single-family home permits were issued in the month of September with an average square footage of 2,436.  Staff issued significantly fewer permits through the first two quarters of 2018 compared to last year. Nonetheless, the department is averaging 18 starts per month which is a healthy pace for adding new housing to the market. Completions started slowly in 2018, but after the second quarter our builders are catching up to last year’s pace and turning over finished houses at a rate nearly identical to last year.

Staff also issued permits for a couple of non-residential projects including a remodel permit for the former Rite-Aid store to be converted to a Dollar Tree and a development permit at 740 North Price Road for a contractor’s storage lot. 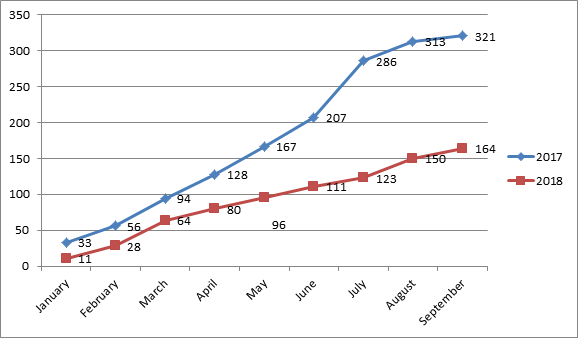 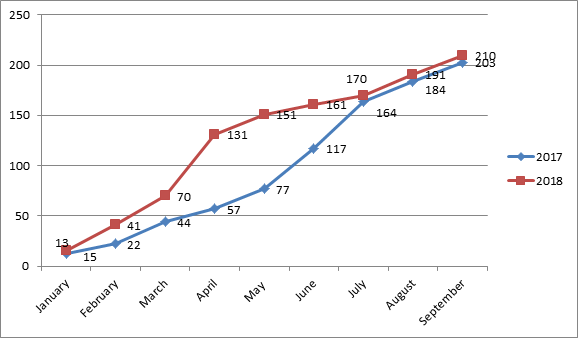 Parks.  The lighting system for the athletic fields was repaired along with leaks in the restrooms. Wasp nest removal was complete throughout the park to include around the playground pavilion.

Downtown and City Hall. Weekly maintenance throughout downtown was completed to include City Hall, The Bowl, the Town Green, and the Community Plaza. Weed control was applied to the greenspaces and plant beds throughout the downtown area. Beautification improvements to the entrance of city hall were added to include fresh flowers in the planters to add color.

Splash Park.  The park will remain closed for the remainder of the season to allow continued maintenance and improvements.

Golf.  Attendance at the course remained high with the exceptionally warm weather. The annual care program continued as applications were added to the greens and green complexes. The new well project is underway as the installation of new pipes and motors were completed. New electrical service was installed inside and outside the irrigation pump house. Project completion is expected within the next couple of weeks.

Bicentennial Celebration. Sugar Hill celebrated the Gwinnett Bicentennial with a torch run through the downtown area on the 17th of September. Mayor Edwards along with the Lanier High School cross country team ran the torch to city hall. The torch along with panels depicting the history of Gwinnett County was displayed in city hall until the 25th of September. The torch was then relayed to George Pierce Park in Suwanee by the North Gwinnett High School cross country team. It will continue to make its way through the remaining cities on its path being displayed through mid-December.

September hosted several events in the city’s downtown area. The Broad Street Band held their first rehearsal in The Eagle Theatre. Jogging for Jambos, a 5K charity race that raises money to purchase new pajamas for foster children was held in downtown Sugar Hill. VIDA Atlanta hosted their annual event in The Bowl, bringing around 5,000 guests to the city throughout the day. The Gwinnett Chamber Business After Hours event was held in city hall where Mayor Pro Tem, Curtis Northrup spoke on the downtown developments. The Show Business kicked off their tribute band concert series in The Bowl with Departure, a Journey tribute on the 8th of September followed by Rumours, a Fleetwood Mac tribute on the 29th. The Annual Sugar Rush event is planned for the 20th of October and will feature art, food, music, games and fun for the entire family. The Bowl concert series will feature its season closer. Don Felder, formerly of The Eagles will perform on the 26th of October.

E Center.  The development has been selected as a finalist for the Community Redevelopment Award to be presented at the Metro Atlanta Redevelopment Summit on the 25th of October.

Community Connections. The next quarterly Community Round Table will be hosted on Monday, October 29th. Leaders from each of the Sugar Hill community groups will gather to discuss collaboration opportunities and share updates about their work in the city.  Sugar Hill will be participating in Gwinnett’s Great Days of Service event on Friday, October 19th with a project focused on the care and maintenance of the Sugar Hill Cemetery. We are partnering with the Historic Preservation Society to clean headstones and clear debris necessary for documentation of any potential unmarked graves. For more information or to sign up to serve as a volunteer, contact Varessa at vbutts@cityofsugarhill.com.

Communications. An internal Communications Committee comprised of city staff representatives from each department will begin meeting this month. The group will focus on communication strategies to share information with the employees and the public highlighting community initiatives, events, and city operations. The weekly operations report has been redesigned and is now easily shareable on social media via a direct link.

Downtown Sugar Hill. The downtown area may be selected as a filming location for a television show. Location scouts have toured a few locations in downtown Sugar Hill in consideration of shooting current and future scenes.

Gas Department.  The Gas Department staff has now installed over 2,400 transmitters in the automated meter reading system, outpacing our annual goal by 10%.  Our staff completed utility-locate services on 475 sites for the month. The staff has been assisting with downtown development as well as pipe repairs on the golf course irrigation system. In addition, training on regulatory compliance requirements, leak surveys, new service installations, and 77 other service requests were also completed to round out the workload last month.

Street & Stormwater Department.  Street department staff has been assisting with the newly acquired downtown properties, getting them ready for redevelopment and incorporating them into the maintenance schedule.  As the seasons change, staff worked the medians on Highway 20 and Peachtree Industrial Boulevard with aeration, seeding, and fertilization work during the month of September.  Stormwater and development inspections, yard debris collection, storm debris removal, mowing, and storm drain maintenance continues to keep the department staff busy.

E Center.  Theatre seat installation is now complete.  The irrigation and landscaping portion of the project will be wrapping up soon.  Some other features and finishes, like the gas lanterns, have been installed and are now operational.  Low voltage, electrical connections, equipment testing, commissioning, training, and permit closeout are the focus of the project team now. The contractor is working through preliminary punch lists as they converge on substantial completion.

Sidewalks Projects – Whitehead and Suwanee Dam Roads. The SPLOST-funded sidewalk project is ready for contract award, and construction authorization is right around the corner.  The project proposes to add sidewalks on Whitehead connecting our downtown with Suwanee Dam Road as well as adding them on Suwanee Dam Road from Johnson Road north to White Oak Elementary School.   This work is jointly-funded with the county and will link key destinations in and around the city.

LMIG Annual Resurfacing Program.  The two-year cycle of road repairs and repaving is currently still in the bid phase with a recommendation pending.  The project will be authorized for construction once the bids are approved, contract awarded, and work can be scheduled, perhaps as late as spring of next year.  The roads included in the next iteration of improvements are as follows:

Sugar Hill Greenway.  The final design is now in the permitting phase while right-of-way acquisition continues.  There are some 26 parcels required in Phase 1 of the project and discussions are ongoing with the owners to provide clearance for the proposed trail.  The first phase of the greenway project will connect downtown with the two parks on Level Creek and further to Whitehead Road, via Georgia DOT property in the area, a distance of nearly five miles.