Planning. An open house meeting was hosted by the city in early December to gather input on key issues related to future downtown development as a part of the Livable Cities Initiative (LCI). The project team also met a couple of weeks later to review the status and complete the public response exercises from the open house. The survey is now closed, and staff will work over the next few weeks to assemble draft framework plans for land use, development opportunities and circulation as well as design concepts.

Development. Five single family home permits were issued in the month of December with an average square footage of 2,192. The year closed with 37% (361) more homes permitted than in 2016 (263). 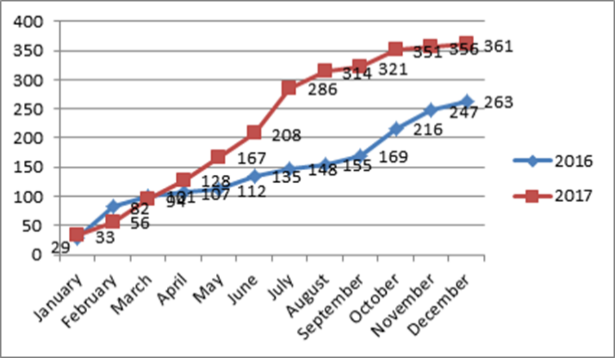 Parks.  Staff performed weekly maintenance and cleaning throughout Gary Pirkle Park. Trees were trimmed throughout the park as well. The water meter was installed at the Community Garden.

Downtown and City Hall. Weekly maintenance throughout downtown was completed. Staff is working to finalize landscape installation project for this year.

Golf.  Due to the colder weather, the course experienced slower play than in recent years. Staff took this time to perform annual inventory and to research and prepare new ways of capturing water for irrigation. Tarps were placed on the greens as a form of protection from the extremely low temperatures. The final tournament of the year, the Santa Charity Classic, was held on December 16th, and collected funds as well as food and toys for those less fortunate during the holidays. All donations were delivered to the North Gwinnett Co-Op.

Events.  Staff is working to finalize plans for the 2018 event line up to include live music at the Splash Park, 5K races, seven national touring bands, three cover bands in The Bowl and much more. Concerts will include a wide spectrum of genres from rock to disco. A full event line up and concert series announcement will be made soon. The announcement will also include dates and times for the annual events such as the Easter Egg Hunt, Sparks in the Park, Sugar Rush and the Holiday Celebration. The Ice Rink continues to be successful and is entering its last month open for the 2017-2018 season.

Marketing/Communications.  Plans for marketing and advertising the upcoming events season and the opening of the E Center are being finalized. Feature pieces about our downtown developments can be found in the Guide to Gwinnett, Gwinnett Magazine and other local publications. New Sugar Hill merchandise is being designed and will be available for residents to purchase in the coming months. The city’s social media pages continue to grow, with the Facebook page reaching over 15,000 people.

Gas Department.  The gas department staff continues work on our automated meter reading system for one of our key routes.  The system is being read manually until the software and hardware testing is complete later this quarter.  The transition to this new system will enable a more efficient and accurate process as well as reduce the risks associated with monthly meter access.  We continue to work on our regulatory compliance activities and training requirements with our new staff.  Staff met with Gwinnett County Emergency Officials at the end of last month to review and better coordinate our Public Awareness program.  Our staff also completed utility locate services on 498 sites this month.

Street & Stormwater Department.  Staff continues to prepare for the upcoming winter season by readying vehicles and equipment for the prospect of inclement weather. The renovation project to the maintenance shop on Hillcrest Road is near completion with a just a few minor items remaining.  The repairs will allow for a better deployment of staff in street and stormwater services and provide adequate meeting space.  Staff performed various stormwater inspections throughout the city to include private detention pond inspections for annual stormwater reporting.

E Center.  Steel erection has wrapped up on the project and the crane is now waiting to be demobilized to another project.  While the structural elements of the project are now in place, the contractor is moving quickly to complete the interior framing and rough-in of the electrical, mechanical, and plumbing trades.  The roofing and exterior sheathing work has been substantially completed on the mixed-use building with the rooftop HVAC units in place waiting to be connected.  The brick masons have had to take a second run at the west elevation of the theater to get the detailing correct, but are making good progress with the exteriors.  The windows and doors are being installed as each stage of the building is being completed on the theater and mixed-use buildings. A few of the signature architectural elements are being completed with the stair tower roof designs, the barrel roof of the gymnasium and the theater marquis approach their finished shape.  We expect some exciting progress in the coming months as the exterior finishes are applied to the project and we get closer to a grand opening just around the corner.

Sugar Hill Greenway.  A Friends of the Greenway meeting has been scheduled for January 29th to update the group on the project as well as to present information on countywide trails planning by Commissioner Lynette Howard.  The meeting is scheduled for 6PM in the History Museum Room on the first floor at City Hall.