Permits/Inspections. Atlanta Bethany United Methodist Church on Whitehead Road obtained a commercial remodeling permit to soundproof their gym. A land disturbance permit was issued for the Solis Sugar Hill mixed-use development by Terwilliger Pappas immediately northwest of city hall. The Solis will include public and private structured parking, commercial and multi-family residential uses. Only one residential building permit was issued in October for a single family detached home with 3,045 heated square feet in Northmark subdivision. 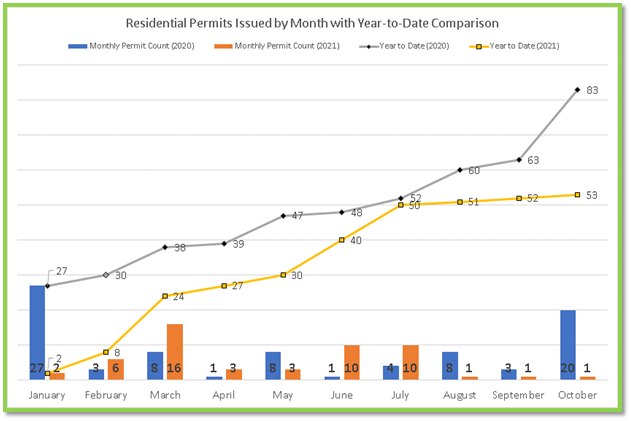 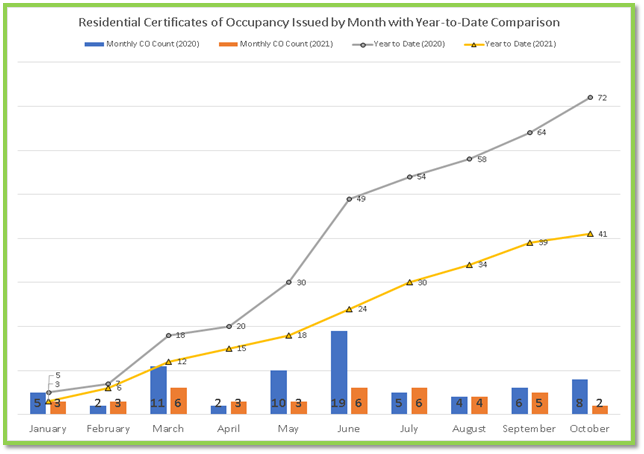 Parks.  Weekly maintenance occurred throughout all park facilities. At Gary Pirkle Park, All-In Futbol Club (AIFC) and i9 Sports recreation leagues continue play with their fall season running through the end of November. The GA Force football team will also play through the month. Upgrades to the camera system were implemented and the striping project in the parking lot was completed. The Community Garden club held their Fall meeting and potluck brunch.

Downtown and City Hall. Weekly cleaning and maintenance were performed throughout the downtown area and on the grounds of City Hall in preparation of the upcoming events and installation of the holiday decorations.

Ice Rink. The tent is up, and installation of the rink has begun in preparation of the planned opening on the 11th of November.

E Center. Gym memberships have reached 14,779.  Thorough cleaning practices continue throughout the facility.  Private rentals in both the Waterfall Room and the classrooms continue to increase with many events planned for the holiday season.

Golf.  October was another successful month at the course. Many items were repaired and updated throughout the course and surrounding grounds. The carpets in the clubhouse were cleaned and sanitized and the sidewalks, porches, gazebo, and grill area were thoroughly cleaned, and pressure washed. We would like to express our appreciation to all the departments that stepped in to assist on these projects. The Georgia Municipal Association hosted a very successful tournament on the 18th of October with over 100 players participating. The tournament raised money for Georgia City Solutions. These funds will support several city-wide initiatives throughout the state. Another team competition, the Bill Elinburg Cup, was held on the 16th and 17th of October and was also a success. A 2-Player Alternate Shot Tournament is planned for the 20th of this month. For more information, on becoming a Sugar Hill Golf Association (SHGA) member or course information, contact one of the staff members at the Golf Course by calling 770-271-0519.

In October we hosted Roots and Boots, Sugar Rush, Pat Benatar, the Swingin’ Medallions, Trick or Treat on West Broad, free movies, and several other events. We estimated over 13,000 guests visited downtown Sugar Hill to enjoy these various events.

This past Saturday, we hosted our final concert of the season in The Bowl, 38 Special put on a fantastic show and performed for a lively and engaged crowd. A special Veteran’s Day Ceremony is planned this Thursday the 11th with music by the Broad Street Band beginning at 10:30 AM and the service immediately following at 11:01 AM.

The Players Guild opens The Trial of Ebenezer Scrooge on the 12th of the month. The show will run through the 21st of November. We will be coordinating with our downtown businesses for Small Business Saturday which will be held on the 27th of the month. We will host The Outlaws in The Eagle Theatre on the 1st of December and the Holiday Celebration will take place on the 4th of December. This event will feature free family photos with Santa, live entertainment, and a vendor market. The Sugar Hill Area Women’s Club is coordinating the vendor market as a fundraiser and are now accepting applications for those interested in participating.

Gas Department.  We have installed 6,205 transmitters in our AMR system with staff devoted to responding to another series of construction-related demands.  Our utility locating staff completed services on 492 sites and worked with our construction contractors on various sites around the city to protect our underground utilities. Staff has been working through regulatory compliance tasks, new service installations, and 65 other service requests to round out the workload last month.

Sugar Hill (Main) Greenway Trail.  TriScapes Construction (TSI) is now complete with the trail segment from downtown through EE Robinson Park (North) and has opened this section.  Drainage pipe installation, pavement repairs, and handrailing were completed previously but orders for the grate tops are delayed.  Barrels will be maintained on the inside section to protect these areas.  This connection from the downtown to Peachtree Industrial Boulevard is a key segment that will allow access via this trail system downtown with two key parks on Peachtree Industrial.  TSI is working to complete the two important bridge and boardwalk sections in the natural areas between Level Creek and Whitehead across the former GDOT right-of-way. The section from Level Creek to PIB has been cleared with much of the grading completed.

Roadway Resurfacing & Repairs 2020/2021.  Construction is at the 80-percent point with all but the Frontier Forest subdivision roads complete.  Gwinnett County Water Department has finished their project in the Frontier Forest neighborhood and will be releasing the six streets on our list for resurfacing starting this month.  Twenty-one (21) other streets have already been repaired or resurfaced earlier in the year. Remaining Streets: Frontier Drive, Forest Green Way, White Oak Drive, Frontier Way, Frontier Trail, and Davis Street

Gold Mine Park.  TriScapes has completed initial erosion control and drainage installation as well as clearing activities.  The project’s pre-engineered restroom building is getting a review and building permit from Gwinnett in order to connect to the sewer main on Level Creek Road.  The proposed park, which includes 50 parking spaces, a restroom building and mine entrance overlook, serves as a trailhead on the city’s greenway and offers a chance for guests to learn more about the city’s gold mining history.

City Hall Parking Deck Resurfacing.   The first two weeks of construction and demolition has been completed with the final stretch involving installation of the new system.  Engineered Restorations will be examining the sidewalk area between the building and parking deck as well for water intrusion locations prior to closing out the project.